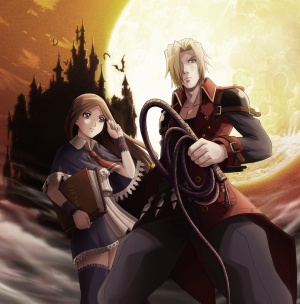 The year is 1944. World War II is in full effect; death is common and souls are restless. It is therefore unsurprising that Dracula's castle has revealed itself at this time.

Enter Jonathan Morris, vampire hunter and son of John Morris of Castlevania: Bloodlines fame, wielding the legendary Vampire Killer whip. At his side, Charlotte Aulin, his childhood friend and a talented witch, especially for her age. With these two working together, Dracula may not stand a chance.

There's just one thing. Dracula's not around.

A new vampire has taken control of this castle: a Mad Artist by the name of Brauner. And things are different under his rule. The castle keep is unassailable; it is blocked by magic produced by a large number of magical paintings positioned around the castle. Brauner is almost impossible to find, and the main evidence of his presence is the occasional appearance of his twin vampire daughters. A mysterious ghost has been spotted, and he seems to be completely immune to Brauner's influence. And not even Death is happy with this sequence of events. (No, wait, make that "Death's especially unhappy with this sequence of events".)

And to top it all off, Jonathan can't even use his whip correctly.

Castlevania: Portrait of Ruin is a Nintendo DS game released in 2006 to coincide with the 20th anniversary of the Castlevania series. It boasts a two-character tag system that allows the two characters to work together frequently, an experience-based subweapon system for Jonathan and casting time-based magic system for Charlotte, and a number of non-castle venues accessible via the various portraits. Extra characters and level limits extend the replay value, including one mode controlled entirely with the touchscreen.

Portrait of Ruin provides examples of: