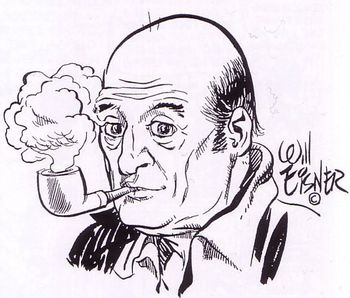 William Erwin Eisner (March 6, 1917 – January 3, 2005) is considered to be one of the most important icons in the Comic Book industry. Born in Brooklyn, New York in a family of Jewish immigrants, Eisner was interested in the cartoon/comic medium throughout his early life. Encouraged by his high school friend and fellow cartoonist Bob Kane (who by the way would later become known for developing an odd character called Batman), young Eisner began submitting his work to comicbook magazine, Wow, What A Magazine in 1936 (at age 19 no less!). Wow! lasted only for four issues over the course of half a year, but Eisner and Wow! editor Jerry Iger decided to produce comic packages on their own. Their company, Eisner & Iger, began selling work to other, bigger comic book companies, with both men making quite a profit during The Great Depression.

Because the comics industry was in its infancy, many problems began to pop up; many which ranged from serious (such as when a mobster began to intimidate the company and had to be frightened off by a young Jack Kirby) to a much more serious, infamous event involving DC Comics. Eisner was commissioned by Fox Publications to, as he would later describe in court: "create another Superman" after the original became a sensation. Eisner's creation Wonder Man (Fox) appeared for only one issue before DC caught wind of it. What would happen next was the first ever lawsuit over comic book copyrights in the history of the industry. Eisner refused to perjure himself and testified against Fox, costing his company a large contract (or so he said

). Soon afterwards, in 1939, Eisner was approached by a newspaper syndicate to create a comic book supplement for them. What would come about as a result was The Spirit.

The Spirit was written and illustrated by Eisner for around two years, until World War II broke out and Eisner was enlisted in the military. Eisner would turn production of The Spirit over to several ghostwriters, including Lou Fine and Jack Cole (who would later create Plastic Man). Their run of The Spirit lasted during Eisner's career, and unfortunately their work was considered to be inferior to those of Eisner's. Eisner, however, was having his own adventures in the military, where he was commissioned to create posters reminding soldiers how to care for their gear. When the war was officially ended, Eisner returned to work on The Spirit.

That series went for about 11 years, until Eisner's boredom with the title and the growing public hostility to comic books (among other troubles concerning deadlines) convinced him to focus on new area of comics: graphic instructional sections in manuals for the US military. For instance, during The Vietnam War, soldiers were finding themselves in dire peril in battle with their new M16 rifles failing on them far too often for comfort. When the US military finally clued into that reality, they rushed in not only maintenance kits, but also had Eisner draw a full comic book

explaining how to maintain the weapon properly. This kept Eisner busy until the 1970s.

By then, Eisner was eager for a new challenge and created the first truly successful Graphic Novel, A Contract with God. This set Eisner on a revived career as one of the undisputed grand masters of the medium for the rest of his life with a series of acclaimed graphic novels. Oh yeah, you ever hear of the Eisner Awards, given to comic books? Eisner created that too.