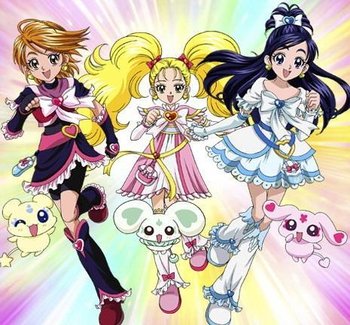 Nothing says "Let's Get Dangerous!" like a nice frilly frock, are we right, girls?
Advertisement:

No Magical Girl can be complete without a spiffy costume, decked out with frills and bling. While there are a huge variety of styles when it comes to such costumes, the pervading theme seems to be colorful, very girly, highly unlikely fighting gear meant to appeal to Rule of Cool, Rule of Cute, or Rule of Glamorous and whose impracticality never seems to get in the way of their ability to take out the bad guys. Impossibly Cool Clothes is definitely in effect here. Usually Suspension of Disbelief is required to believe such a costume is ideal for fighting, though occasionally there will be a Handwave in the form of an explicit mention that the protection of the outfit is magical. Another possible reason for having these outfits (on the animators' part, at least) instead of the more traditional superhero bodysuit, is that it's a lot harder to have a flashy, step-by-step transformation sequence with a traditional superhero outfit.

While every Magical Girl has her own unique costume, there are definitely some very common elements that pop up within the genre and which, when combined, become the iconic Magical Girl costume. The most common traits include:

Other elements may include items from the Cute Witch motif (which at one point was what Magical Girl meant), i.e. a witch hat, and echoes of armor, like shoulder pads, arm bracers and such, though rarely actual armor. Magical girls who go through a mid-season, new season or plot-related power upgrade will often get a Frilly Upgrade for their costume to match.

A Sub-Trope of both Pimped-Out Dress and Impossibly Cool Clothes.

This trope applies to Magical Girls only for anything else, please consult Costume Tropes.