Butterfly of Death and Rebirth 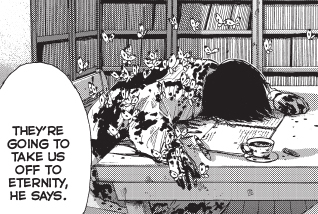 "The white wings of moon butterflies
Flicker down the streets of the city,
Blushing into silence the useless wicks of sound-lanterns in the hands of girls."
— Elizabeth J. Coatsworth, "Sky Lotus" (as quoted (without attribution) in the H. P. Lovecraft and Anna Helen Crofts collaboration Poetry and the Gods)
Advertisement:

Whenever you see a pretty (usually blue or black) butterfly show up, things are about to get Symbolic.

For millennia, the world has latched on to the image of the butterfly: its metamorphosis from a caterpillar to a butterfly used as a metaphor for death and rebirth. In brighter series, it means "Don't worry, be at peace, the great circle of life continues on." In others, it means "You're going to die and turn into something else and it being pleasant isn't necessarily an option." Dead butterflies are an especially ill omen.

When the butterfly is used as a symbol of change in general, not just death and rebirth, see the Super-Trope Butterfly of Transformation.

Not related to Butterfly of Doom or Schrödinger's Butterfly. See also Pretty Butterflies and Moth Menace.

Contrast with Macabre Moth Motif; they are similar but moths tend to have a more obviously sinister feeling.

Alternative Title(s): The Butterfly Of Life And Death