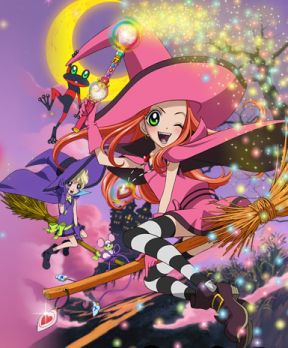 Known in Japanese as majokko (魔女っ子, literally "witch-girl"), this is the original Magical Girl archetype. Sometimes she's from Another Dimension or otherwise Magical Land unless the whole show is in a magical setting. Magic study is often equated with school, and many characters are out getting their licenses. The origin of magic is implied to be genetic with training required to hone it. She may be a princess, who may or may not be visiting Earth as part of training to become queen - if so, she may have to compete with rivals to the throne.

She may or may not be actively fighting monsters. Usually, it's a hard enough life just trying to get through the day, and she'll use her magic (often a non-flashy variety) to make things easier. Theoretically.

Cute Witches are sometimes thought to have influenced the rather benevolent image of witches in Japan; even the standard Goth Girl tends to be somewhat cute. Will almost always wear a Robe and Wizard Hat, and may or may not use a Magic Wand. If she has a pet, it will likely be a cat.

If and when the Cute Witch grows up, if she doesn't lose her powers, she usually becomes the Hot Witch.

A subtrope of the Witch Classic. Contrast the Wicked Witch, who is usually "old and ugly,"note Dorothy's phrase in The Wizard of Oz though not always — occasionally the two overlap. If the Cute Witch, Hot Witch, and Wicked Witch appear together, they may form a Maiden Mother And Crone trio.