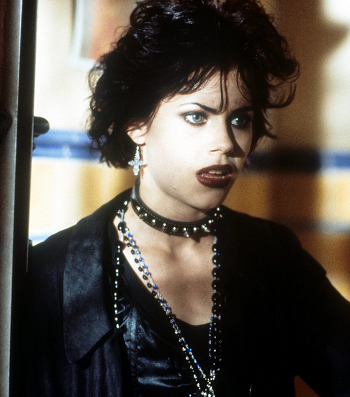 "I like spiders, loss and rain. I'm only happy when I'm in pain."
— Goth Kid, South Park: "Goth Kids 3: Dawn of the Posers"
Advertisement:

It can't be emphasized enough that Hollywood really does not understand the myriad and various subcultures of young people (or these days, aging former young people) and the many subtleties to be found within. Hence this trope, which refers to stereotyped goths in popular culture.

Most goths in fiction will be presented as a Eerie Pale-Skinned Brunette who wear only black, leather getups, suntan at night and listen to loud depressing music. It's worth noting that goth is neither a skin tone nor a fashion statement, so most media tend to treat goth characters almost as if it were a fashion or fad for a darker Cutie to go after. Of course, thanks to Hot Topic and its ilk, goth has been hijacked by a large number of people who think it's nothing but a fashion statement, making for a sort of Truth in Television that utterly infuriates (or nihilistically amuses, see above) "true" goths, though extending a hand to "baby bats" who may genuinely be interested in digging deeper is generally viewed as a necessary duty (that fifteen-year-old kid in a Blackcraft shirt and ripped black skinny jeans with a fake grill who mostly listens to Soundcloud rap and Marilyn Manson very well could become a good friend of yours in five years, after all), and gatekeeping behavior is heavily frowned upon (though it does unfortunately happen). There is also a tendency to equate goths with vampire wannabes and the vampire-obsessed. While, like BDSM, there is some overlap between the two subcultures, and the post-Victorian vampire can be considered a goth icon, equating the two in the presence of a goth can be hazardous to your health.

Please note: Goth as a subculture dates to the late '70s. (Teenagers sometimes think they invented it.) And just to keep things clear, goths are markedly different from emo people. Woe betide the person who gets these cultures confused in real life.

Although there is a sort of goth template, this template is built upon and changed dramatically to suit the individual's tastes. In order to be considered truly goth, one must fulfill the majority of the following requirements (in order from least important to most important):

Note that a majority of these are required — not all of them. Just because someone doesn't dress goth doesn't mean they aren't — as long as they fulfill most of the other qualifiers on that list, they are indeed goth (some people just don't like the style. In fact, Claire's markets to the "preppy goth" niche, crossing what are usually opposing factions). Also, goths are going to fluctuate as to what degree they display each trait.

There are a few other things that goth is not:

For the manga of the same name by Otsuichi, see Goth. For the video game, see Gothic. Being a fan of Gothic Horror note Its relationship to the modern goth community is starting the tradition of calling dark things gothic. doesn't make one a goth, but there are subcultures within the gothic community who draw inspiration from various Gothic Horror Tropes. Elegant Gothic Lolita is an unrelated clothing style from Japan with its roots in both Lolita Fashion and the Visual Kei subculture (which then inspired the Anime Character Archetype of the same name), but there is some stylistic overlap given that both draw on Victorian styles, and a few in the Goth subculture have deliberately combined the two beginning in the 2000s.

For those barbarians infamous for their Rape, Pillage, and Burn ways originating largely from the area we now call Germany... you're out of luck, as the Useful Notes page doesn't quite cover that period of Germanic history. Maybe you should try The Other Wiki instead

A handy guide to different (stereo)types of goths can be found here.

Subtropes of this are as follows:

Miss Spider, who has a spooky design in mostly black-and-white colors, loves the night and darkness, has a reclusive nature, and squeezes some moments of creepiness into the cheery group songs. She's actually quite nice if you're nice to her.

Miss Spider, who has a spooky design in mostly black-and-white colors, loves the night and darkness, has a reclusive nature, and squeezes some moments of creepiness into the cheery group songs. She's actually quite nice if you're nice to her.