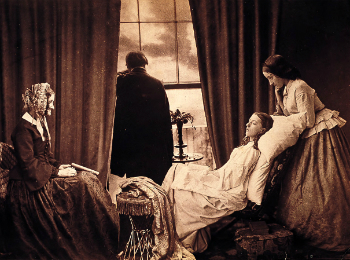 "Romantic opera usually deals with the subject of some romance which never comes off owing to the untimely demise of the prima donna through one of four causes: murder, suicide, madness or TB."
— Anna Russell
Advertisement:

If you're the star of a Victorian Novel or an opera which could have been adapted from one, you're preferably blonde and blue-eyed, with an alabaster brow and feet light as the entrance of Spring. So pure are your thoughts that you faint at even the sight of blood, and have little stomach for gory tales.

You're also dying of a disease which will probably be called "consumption" if it isn't The Disease That Shall Not Be Named. Fortunately, this ailment has no ill effects other than adding a poignant cough to the appropriate sentences, and making your eyes even brighter, your skin even paler, and your complexion even more striking. In operas, it won't prevent you from singing at least one aria in your death scene.note What was actually called "consumption" in the Victorian era is known as tuberculosis

today, and its Real Life effects are not nearly as glamorous as Victorian Novel Disease makes them out to be.

Standards of beauty are a funny thing. When the lower class is poor and thin and haggard looking, the nobility commissions portraits depicting themselves as Rubenesque, with rosy cheeks and dimpled arms, to show off their indulgent dining habits as a way of immortalizing their wealth. However, when the economy stabilizes and the poor are able to be plump and rosy-cheeked, then the standard of beauty... shrinks. Women become diminutive, frail, want little things, and prone to fainting spells and headaches. Rather like Dr. Seuss' star-bellied Sneetches, the "haves" set as the height of desirability whatever quality the "have-nots" cannot achieve.

Alternatively, if you experience something extremely harrowing or frightening, you can expect to fall into a subtype of VND, where you might ‘faint from exertion’ then spend several months in bed beset by a mysterious half-physiological, half-psychological conundrum of a condition: see Brain Fever.

When suffering from Victorian Novel Disease, you can expect to meet plenty of people Oop North or from Zummerzet, who will probably end up teaching you a thing or two about class, life in the mills or in the countryside, and how to love someone for real, amongst numerous other lessons. That is when they aren't dying of VND themselves.

The epitome of the fragile, delicate woman is that she is Delicate and Sickly — Always Female, always innocent and pure, almost always young note  (usually in her teens or twenties, someone you wouldn't expect to be terminally ill), always dying of some disease that is very slow at actually killing her. As she lies enthroned in her beautiful sickroom, everyone around her spends countless hours musing poignantly on her death and/or trying to surround her with the things she loved most in life. Her proximity to the eternal gives her immense wisdom and insight, and she will be a neverending source of advice and comfort to her caretakers, to the point where it's hard to tell who is comforting whom. And, of course, since Women Are Delicate, no aspect of her disease (whatever it may be, if it's named at all) is "icky" in any way, even if it would be total Body Horror in Real Life: she will never suffer from vomiting or diarrhea, never sweat more than a light glisten despite possibly running a fever, never develop any unsightly skin rashes, lesions, or lumps, and any blood or mucus she coughs up will always land delicately (and unseen) in her lace handkerchief. Even when her weakness becomes so great that she can barely move, she will never succumb to anger, despair, sorrow, regret, sadness, or frustration. When at last she slips the surly bonds of Earth to touch the face of God, those around her (one of them likely holding her frail form in his arms) will smile through their tears and rejoice that her pure soul has taken its flight from this dirty world. Gag.

In modern times, a virulent strain has developed as the Soap Opera Disease. The Littlest Cancer Patient is usually more upbeat about their impending death. A common treatment for this is Healthy Country Air or a trip to a Healing Spring. Contrast Dangerous Drowsiness, where someone does get tired, and it's serious. Dangerous Drowsiness can also affect both sexes.