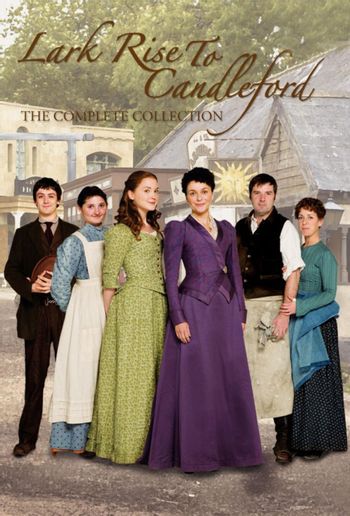 Lark Rise to Candleford is a BBC television series based on a trilogy of semi-autobiographical novels by Flora Thompson: Lark Rise, Over to Candleford, and Candleford Green.

The series is set in the 1890s, with the action taking place in the rural village of Lark Rise, and the neighbouring town of Candleford (both fictional), both situated in Oxfordshire. The series is told from the perspective of Laura Timmins, a young Lark Rise girl sent to live and work in the Candleford post office with her mother Emma's cousin, the postmistress Dorcas Lane. Many of the show's storylines are driven by the contrast between the rural setting of Lark Rise and the more urbane Candleford, and the clashes that these differences produce between the residents of both. Lark Rise residents include Laura's family (her parents Robert and Emma and her four younger siblings), Twister and Queenie Turrill and the Arless family. Candleford residents include postman Thomas Brown, his wife Margaret and the Pratt sisters, who own and run Candleford's dress shop.

Producing over four seasons' worth of hour-long episodes, it strikes a balance between always making sure the Reset Button is pushed and creating a dynamic, Soap Opera-style storyline rather than sticking close to the text and only showing one serial, in the manner of other BBC period dramas. It was cancelled in 2011, and despite a fan outcry, resolutely remains that way.

The books are written along the lines of memoirs but provided little in the way of complete stories for a television writer to adapt successfully without making a lot up to keep a modern viewer entertained, so there is surprisingly little overlap with the book, at least in the way the stories are played out. Laura's family in Candleford is conveniently ignored (or pressed into service elsewhere, in the case of JD) and Candleford and Candleford Green are separate places, with Laura's family in Candleford and Dorcas Lane and the Pratts (who live with their father) in Candleford Green. Flora Thompson regularly mentions what happens to the characters later on, with obvious references to the Boer War, the Great War, the future of Mr. and Mrs. Timmins and the contrasts between the 1930s (the books were written during the first half of World War II) and the 1890s. She points out what was already fading from public consciousness and the book itself was a Nostalgia Filter of sorts, mentioning the delights of a bath in the 1890s as against the spartan nature of modern bathroom conveniences and that her mother, yearning for an income of 30 shillings a week, ended up getting that as a pension in the first half of the 20th century when it did not go nearly as far as it had in the late 19th century.

The book also has a lot of stories unsuitable perhaps for a modern audience: Laura's relatives have very antediluvian views about the Irish, Sir Timothy and his wife are not at loggerheads and do not wash their dirty linen in public, still less with Dorcas any way involved with the squire romantically, and there is a good bit of the books devoted to children's jobs (particularly the girls who go into service at the age of 12 on a trial year or "petty place"). Laura's age is increased from 14 to 16, probably to appeal to modern sentiments in this way and avoid questions about child labour (except in picturesque, viewer-friendly ways such as harvesting). Laura and Edmund are kept away from school originally because their parents always intend to move to "the market town" (not Candleford, and never named). The long walk to Candleford, smoothed over in the TV series to keep the flow of traffic from Candleford to Lark Rise moving, is detailed with painstaking accuracy as Laura and Edmund walk there in the summer to stay with their cousins - and take an entire day to do so.

Much of the romance has had to be concocted for modern tastes too; Philip White and Daniel Parrish (Godfrey Parrish in the book) are mentioned as romantically involved with Laura, but Fisher Bloom is a creation of the TV writers and Alf is not involved with Minnie, who is Miss Lane's telegraph runner and therefore a postgirl in her own right, rather than a clumsy maid. Interestingly enough, the bicycles, which play a prominent part in "Candleford Green", are mentioned as being the prompt for a lot of female emancipation, which is dealt with in the TV series with Hattie Morahan's character shocking Pearl Pratt by her "rational dress" and turning it into an explicitly political issue.

Dorcas is portrayed almost as the victim of Dawson Casting; her age is not an issue in the TV series, but in the book she is mentioned as being a "crusty old lady" of fifty. Similarly the actress playing Adelaide is a lot younger than she appears onscreen (and is implied to be in the book).

The music in the TV adaptation, however, is lifted directly from the book, with many of the songs people sing having been written down in the memoir, particularly Lotty Collins' "Ta-ra-ra-boom-de-ay" and its parodies, one of which is placed in Minnie's mouth in the TV series but was mostly bastardized by the men in a suggestive manner. "The Three Tinkers" which the Pratt sisters' father sings, is actually a children's game.