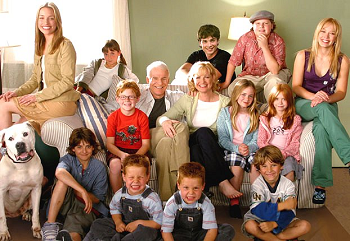 Mr and Mrs Baker and their twelve kids (discounting the dog)
Lor: I've got 13 brothers. They have their own [basketball] league.
Tino: I thought you had 14 brothers.
Lor: Huh? Oh, yeah! I forgot to count one of the Dannys.
— The Weekenders
Advertisement:

This is when a character has five or more siblings. The parents will probably be Happily Married and have usually bred like rabbits. Sometimes they are the collective root of The Clan; other times, at least some of the children are from previous relationships. Expect this to be a noisy, rowdy clan as a whole. Also, this family will probably be portrayed in a positive light.

If this trope intersects with the Badass Family trope, be very afraid. But it's more often Played for Laughs.

For some reason, this is a popular subject for Reality TV shows — probably because this is extremely rare nowadays. In older works and stories, it sometimes just happens in passing. In the same way, older works had tropes like "the seventh son of a seventh son is always some kind of Chosen One", and this wasn't some phenomenon that's extremely rare to begin with, the way it is now.

In older works, this is generally seen as something great, because in reality, most people had massive numbers of children; this trope indicated not the number of births but the lack of deaths. (One reason you had so many was that in few families did all survive.) Nowadays it's more a comedy trope. It was also common for the siblings in older works to be all-female, with their parents disappointed that they weren't getting the son they wanted no matter how often they tried. Depending on how important they are to the work, expect the siblings to have varying and distinct personalities.

See also The Clan, Big, Screwed-Up Family, and Tangled Family Tree, likely results of this kind of birthrate lasting more than one generation.

Inexplicably Identical Individuals overlaps with this. Likely to lead to a whole lot of children suffering from Middle Child Syndrome; in fiction especially it can also result in an Resentful Outnumbered Sibling. The oldest and youngest siblings will often be Practically Different Generations. See also Magical Seventh Son. An Explosive Breeder always has these; someone with Too Many Babies has them all at once.