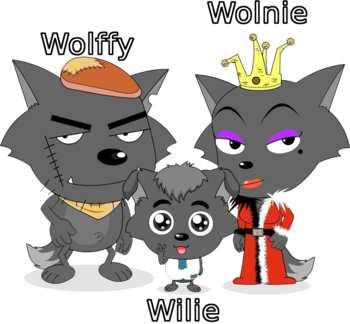 "So we have Blossom, Bubbles, and, hmmm, Buttercup because... it also begins with a B."
— Professor Utonium, The Powerpuff Girls Movie
Advertisement:

A form of Theme Naming in which everyone in a family, or one generation of a family at the very least, all possess names with alliteration, that is, starting with the same letter or syllable. Bonus points if their last name also starts with the same letter. While obviously this can be expected to be intentional on the part of the writers, it can also be shown to be deliberate on the part of the characters. Such characters will usually be a little on the quirky side, if so.

May or may not also be an Alliterative Name, in which both first and last names have the same letter. The Theme Naming can be taken even further when these same letter names all have a theme within the same letter. When done In-Universe by the characters, can overlap with Who Names Their Kid "Dude"? and can lead to Rapid-Fire Name Guessing. Taken to extremes, this trope can make recitation of family members into a Tongue Twister.

The trope is fairly rare in films, where a common screenwriting trick is to avoid multiple names beginning with the same sound to make it easier for the audience to keep track.