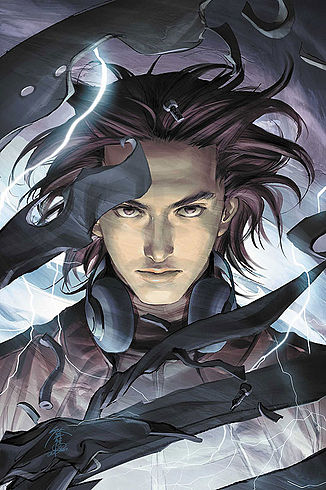 Victor's mother was Marianella Mancha, a former petty thief, while his father is none other than Ultron. Victor lived a normal life (or so he thought), attending high school in Los Angeles, with a deep admiration for superheroes across the world. Little did he know, he was only a few years old, implanted with Fake Memories, and was intended to become the Manchurian Agent that would infiltrate The Avengers and dismantle them from the inside, destined to become the supervillain known as Victorious...

... but then the Runaways learned of this thanks to the Gert Yorkes of that Bad Future travelling back to warn her younger self. They basically kidnap him from high school, where Victor learned of his powers fighting off the others, and after a hectic fight and chase, Victor is ultimately subdued and taken back to the hostel. Following an interrogation, they learn that his father is Doctor Doom, or so it seemed. In reality, his father turned out to be Ultron, and it was there where Victor learned of his destiny, and from that moment onward he vowed to never become that person, taking a heroic path instead.

Victor Mancha is the first new recruit to the Runaways following the end of The Good Die Young arc, replacing Decoy Protagonist Alex Wilder as the long-running second male of the team, and is the best-known non-original Runaway overall, to the point where he's probably just as well known as the originals, if not more than the others besides Nico Minoru.

His powers include Super Strength, Super Toughness, electromagnetokinesis, and various computer gadgets built into him.

Oh, and since he's the son of Ultron, he's got relatives as diverse as Hank Pym, The Vision, Wonder Man, Scarlet Witch, and Wiccan.