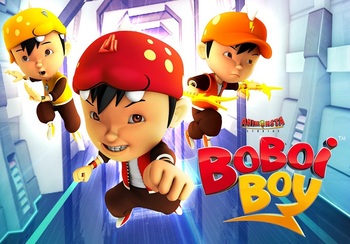 Aliens invading Earth for cocoa beans
Prized throughout the galaxy.
They're coming soon, they're coming fast.
I don't know if we can last.
So we all need a saviour to defend our planet Earth:
BoBoiBoy!
—The English version of the original Theme Tune
Advertisement:

BoBoiBoy (pronounced Bo-Bo-Boy) is an animated series from Malaysia produced by Animonsta Studios featuring a group of kids with various superpowers. The titular character, BoBoiBoy, has the ability to control elements as well as split into three while his friends have other abilities, such as flight, super strength, super speed and the ability to turn objects into food.

The first season of the show ran from 2011 to 2012 and had 13 episodes containing a Story Arc which largely focuses on an alien Adu Du and his Robot Buddy Probe, who has come to Earth for cocoa beans, which, though plentiful on Earth, is thought to be extinct in the rest of the universe. Not only that, cocoa beans also happen to be an invaluable source of energy. Adu Du also happens to own a Power Sphere, which are spherical robots that have the power to grant a user superpowers, but in the first episode, it was taken by BoBoiBoy and thus the Sphere (named Ochobot) granted him powers instead.

Due to the popularity of the show, it was renewed for a second and third season airing from 2012 to 2016 featuring new characters and enemies. A feature-length movie was released in Malaysia in March 2016, a sequel film followed in August 2019. The soft reboot sequel, titled BoBoiBoy Galaxy began airing on TV on 25th November 2016. It follows the cast taking their adventures and battles against evil to space, by rescuing other Power Spheres from being abused in the hands of power-hungry aliens. The Galaxy series is continued in a comic book series called simply BoBoiBoy Galaxy Season 2.

It is available for viewing on Monsta's YouTube channel

with English subtitles. A separate channel

exists for English-dubbed episodes as well.

Mechamato, by the same studio, takes place in the same world, but in the past.