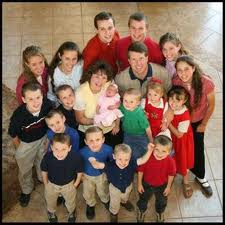 They've had at least one more kid since this picture was taken.
Advertisement:

19 Kids and Counting (formerly 17 Kids and Counting and 18 Kids and Counting) is an American Reality TV show that aired on the cable channel TLC from 2008 until its cancellation in 2015, featuring the lives of Jim Bob and Michelle Duggar, an ultra-religious family from Arkansas, and their children, called Josh, Jana, John-David, Jill, Jessa, Jinger, Joseph, Josiah, Joy Anna; twins Jedediah and Jeremiah; Jason, James, Justin, Jackson, Johannah, Jennifer, Jordyn, and Josie. (Sensing a theme here?)

The show follows the Duggars as they explain their unusual lifestyle raising 10 boys and 9 girls; the family is very religious, the children are homeschooled, do not dance, the girls wear long skirts rather than pants, and they don't even kiss before marriage (holding hands is okay)note With parental permission, of course.

In May 2015, the show was pulled off the air due to Josh Duggar's past child molestation accusations coming to light. On July 16, 2015 TLC announced that they would not be renewing the show for an 11th season or be reshowing any of the series' previous episodes. However, the show was effectively Un-Cancelled just 5 months later, with the premiere of Jill and Jessa: Counting On in December 2016. Ostensibly a Spin-Off created for Jill and Jessa to tell their stories relating to the revelation that older brother Josh had molested them, after the first couple episodes, the series turned right back to the original series's premise of focusing on the entire Duggar family. TLC had moved away from producing full seasons but cut all ties after Josh was arrested on child pornography charges in the spring of 2021 (he would be convicted that December).