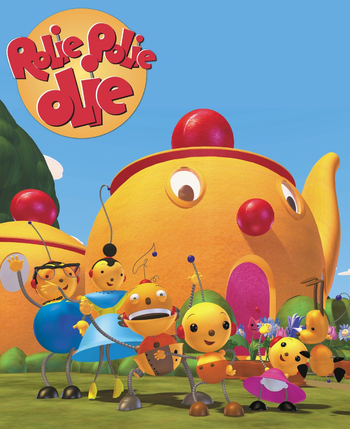 The Polie family left to right: Percy Polie, Polina Polie, Pappy Polie, Olie Polie, Zowie Polie, and Spot
Way up high in the Rolie Polie sky, is a little round planet with a little nice guy.
He's Rolie Polie Olie, he's small and spurt and round.
And in the land of curves and curls, he's the swellest kid around!
— Intro
Advertisement:

William Joyce's Rolie Polie Olie is a computer-animated Canadian Preschool Show created by illustrator William Joyce (who also helped out with the show's production) and produced and distributed by animation studio Nelvana. It ran from 1998 to 2004 for a total 78 episodes, as well as two direct-to-video movies. It ran on CBC and later re-aired on Treehouse in its home country, while in the United States, it aired on Disney Channel's preschool block Playhouse Disney.

Olie Polie is a little robot boy who lives with his mother, father, grandfather (or "pappy", as he calls him), little sister Zowie and their dog Spot on Planet Polie, an Art Deco-inspired world populated entirely by robots and sentient objects. Together with his cubical friend Billy Bevel, whose family is from the nearby Planet Cubey, Olie learns, through fun and imagination, the values of friendship, family and what it means to be a great kid.

This series is notable for being one of the very first TV cartoons to be made entirely in computer-generated imagery.

The entire series can be viewed on YouTube (outside the U.S.) here

, courtesy of Nelvana's Treehouse Direct. However, most seasons of the show were eventually added to Disney+ for U.S. subscribers in September 2021. It is currently unknown if that was thanks to a deal with Nelvana or Disney still having the U.S.-broadcasting rights.

of the series but it was unknown if it was going to be a revival or a continuation of the original series.

"Mission control, I think we have a problem."

"Mission control, I think we have a problem."