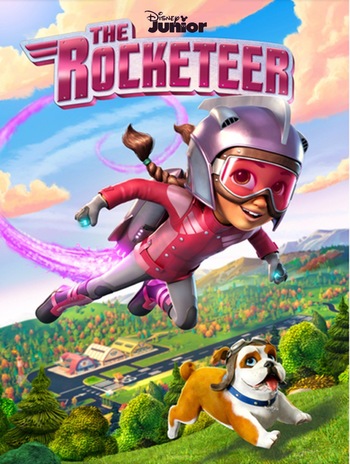 Blasting off to new heights of adventure!
Advertisement:

The Rocketeer is a Disney Junior show

which debuted on November 8, 2019. Based on the Dave Stevens comic of the same name, the show is as follows:

"A young girl named Kit Secord receives a surprise package on her birthday revealing that she’s next in line to become the Rocketeer, a legendary superhero who has the ability to fly with the help of a rocket-powered jet pack. Armed with her cool new gear and secret identity, Kit is ready to take flight and save the day with her gadget-minded best friend, Tesh, and airplane-mechanic grandfather, Ambrose, and her pet bulldog, Butch, who join her on epic adventures to help the people of her hometown and defend it against a variety of villains."

The show was not renewed past its first season and ended on July 25, 2020.