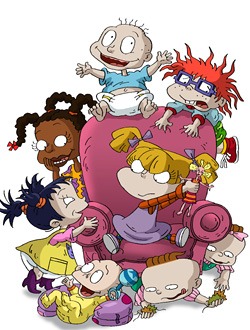 Grown-ups are off in a world of their own,
they don't know what's going on
when the kids are alone!
note Clockwise from top: Tommy Pickles, Chuckie Finster, Angelica Pickles, Lil and Phil DeVille, Dil Pickles, Kimi Watanabe Finster, and Susie Carmichael. The gang's all here!
Rugrats, Rugrats, the things you get into!
Rugrats, Rugrats, trouble looks for you!
A baby's gotta do what a baby's gotta do!
— Rugrats Rock

Rugrats is one of the first three original Nicktoons, produced by Klasky-Csupo and debuting on August 11th, 1991, being the second to premiere. Paraphrasing the description at nick.com:

Grown-ups act as if babies don't know anything, but the fearless, hairless Tommy Pickles and his baby brigade know what's really going on. They'd be happy to inform the grown-ups, if they could only understand baby talk. For the Rugrats, every day is an adventure, especially if the doll-tossing, baby-torturing 3-year-old Angelica is around. Luckily, when the going gets tough, the gang gets going!

The rest of Tommy's gang includes:

Premiering alongside Doug and The Ren & Stimpy Show, it was put on hiatus after three seasons in 1995. Later, with strong rerun ratings, the show was put back into production and became one of Nickelodeon's biggest mainstays. Running from 1991 to 2004, it is Nick's third-longest running animated series, next to SpongeBob SquarePants and The Fairly OddParents.

Three theatrical movies were made as a result of the show's popularity: The Rugrats Movie (1998), Rugrats in Paris (2000), and Rugrats Go Wild! (2003). The first two movies did quite well in box office revenue,note the first one in particular is notable for being the first non-Disney animated film to gross over $100 million in the domestic box office, and was the highest-grossing film based on an animated television series until Pokémon: The First Movie and later The Simpsons Movie whereas the third one tanked hard and was largely responsible for the drought of Klasky-Csupo series since then.

The successor series, All Grown Up!, showed Tommy and his friends, ten years later as Junior High schoolers. Also had another (and significantly short-lived) spin-off, Angelica and Susie's Preschool Daze: the name says it all. Several Licensed Games were made, including Rugrats Castle Capers in 2001 and Rugrats: Royal Ransom in 2002. The series can be found digitally and on DVD, and also frequently airs on NickRewind. Also, be sure to check out The UNOFFICIAL Rugrats Online

In 2018, Nickelodeon announced that a 26-episode revival

is currently being produced. A live-action/CGI film based on the series was also announced at the same time, but was later pulled

. The show's creators Arlene Klasky, Gábor Csupó and Paul Germain will return as executive producers, and characters old and new will be in the revival. The CGI revival series premiered on Paramount+ on May 27, 2021.

The original show was once both the longest running ViacomCBS owned animated series and Nicktoon until both records were surpassed by South Park and SpongeBob SquarePants respectively.

Now has an (in-progress) Recap page.

When Didi brings Tommy with her to class to teach her Home Ec students about how to change a diaper, everyone backs out out of disgust. Cool guy Ramon however steps up and does the job instead.

Example of:
The Diaper Change

When Didi brings Tommy with her to class to teach her Home Ec students about how to change a diaper, everyone backs out out of disgust. Cool guy Ramon however steps up and does the job instead.