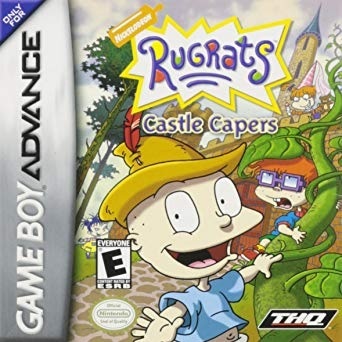 Rugrats: Castle Capers is a video game based on Rugrats, released for the Game Boy Advance in 2001. This game was published by THQ and developed by Software Creations. Its console counterpart, Rugrats: Royal Ransom was released one year later for the Nintendo GameCube and the PlayStation 2.
Advertisement:

Stu has built an enormous kiddie playset for the Reptar Storytime Pizza Parlor in Tommy's backyard. Needing a few more parts to complete it, he asks Lou to look after the babies while he goes to the hardware store. After Lou (inevitably) falls asleep, Angelica sees the playset and declares herself the queen. She wants the babies to be her loyal subjects, but when they refuse, she takes their favorite belongings and hides them. Now, it's up to the babies to go into the playset, rescue their toys, and dethrone Queen Angelica.

The game is a 2D sidescroller where you play as Tommy, Chuckie, Phil, Lil, Dil, or Kimi. There are five stages at the beginning of the game, and they can be played in any order the player chooses. Once all five stages are completed, the sixth and final stage will be unlocked. Two of the other babies are hidden in these stages, and when they are found, they will follow the baby you are playing as. You can then climb on top of them so that you can jump off them and reach higher places. Each level ends with a battle against Angelica. The babies must dodge Angelica's minions and try to recover their stolen toys.