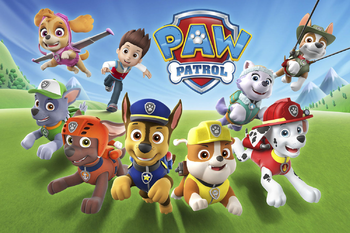 Left to right: Skye, Rocky, Zuma, Ryder, Chase, Rubble, Marshall, Everest, and Tracker. Not pictured: Tuck, Ella, Rex, and Wild Cat.
"No job is too big, no pup is too small!"
Advertisement:

PAW Patrol is a Canadian All-CGI Cartoon made by Guru Studio and Spin Master, which made its Nick Jr. debut on August 12, 2013 and then came to its home country on TVOntario on August 27 that same year.

Every episode follows a Two Shorts format following the adventures of Ryder and his team of heroic puppies. Each dog's house transforms into a special vehicle which corresponds to their special skills. Together they help save Adventure Bay from many troublesome situations. Essentially, think Precious Puppies meet Thunderbirds, just without the extreme disasters, Stuff Blowing Up or atomic technology.

PAW Patrol eventually surpassed Dora the Explorer as Nick Jr.'s most lucrative Cash Cow Franchise, and eventually exceeding such as the longest running Nick Jr. show by nine seasons. It's also sold a lot of The Merch, which isn't surprising considering that Spin Master, the company that makes PAW Patrol toys, owns the property.

A theatrical film, titled, PAW Patrol: The Movie, was released on August 20, 2021. A sequel, PAW Patrol: The Mighty Movie, is set to release in October 13, 2023. A Spin-Off series starring Rubble has also been announced

Recap page is under construction.

"TV Tropes! TV Tropes! We'll be there on the double!":

You're all such good pups!