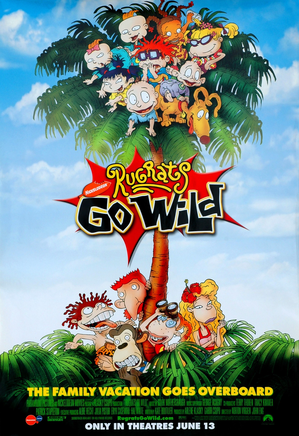 Rugrats Go Wild! is the third and final Rugrats movie, as well as the second and also final The Wild Thornberrys movie, released in 2003. Thus making it a Crossover for both series.

Promising his family and friends a cruise trip, Stu causes them to miss the cruise and has them travelling on a small boat, which turns out to have been his real plan for the vacation all along. This leaves the parents angry and disappointed due to the lack of warning. To make matters worse they're caught in a storm, shipwrecking them on a tropical island with no way to get home, which Stu is quickly labeled the cause of.

Meanwhile, Tommy's hero Nigel Thornberry and his family happen to be on the same island filming a documentary in search of a rare leopard.

The babies search the island for "Nigel Strawberry" with the hopes that he'll help them get back home. Nigel finds them, but then a coconut falls on Nigel's head and he gets amnesia, making him think he's a baby. At the same time, Eliza runs into Spike (who, thanks to her ability to talk to animals, is able to communicate with her with the voice of Bruce Willis), who is searching for the babies, and offers her help. Unbeknownst to them, the leopard is also hoping to find the babies...

Though it did earn enough money to cover its $25 million budget, it was still a box-office disappointment, only making $39,402,572 in domestic gross. It also didn't help that it was released in a congested market of movie sequels that year. This all lead to Klasky-Csupo going dormant for at least five years in 2006. To date, this is also the last non-SpongeBob major theatrically released animated feature based on a Nicktoon. Future Nick films like this since then ether air on the main Nickelodeon channel or go onto Netflix.

Because of Eliza Thornberry's ability to talk to animals, Spike communicates orally for the first time ever.

Because of Eliza Thornberry's ability to talk to animals, Spike communicates orally for the first time ever.