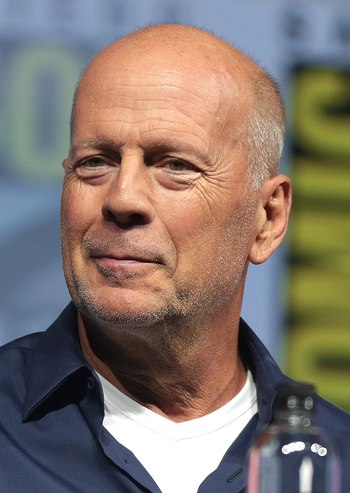 "There are many winding paths a man can follow to greatness. He could build an orphanage, or perhaps write a symphony. But there is only one man in the history of history to have achieved greatness by screaming 'yipee-ki-yay, motherfucker' and pushing Professor Snape out of a window. That man was this man."
— Cracked
Advertisement:

Walter Bruce Willis (born March 19, 1955) is a retired American actor, producer and blues musician known for his smirk and manliness.

Willis was born in Idar-Oberstein, West Germany, as the son of David Willis, an American soldier, and Marlene, a German banker mother, giving Willis dual citizenship of both Germany and the United States. After being discharged from the military in 1957, his father relocated the family to his hometown of Carneys Point, New Jersey. Willis, who spoke with a stutter, showed an early interest in acting during his time in high school, as he discovered that it reduced his stuttering, joining up with the local school drama club. His interest lasted after graduating high school in 1973, as he drifted between temporary jobs in his native New Jersey, including doing stints as a security guard and a private investigator. He eventually enrolled in the Drama Program at Montclair State University, where he was cast in a production of Cat on a Hot Tin Roof. He then moved to New York City in 1977, where he mostly worked as a bartender while appearing in bit parts in stage productions and television shows throughout the early 1980s.

Willis' breakthrough as an actor, however, came in form of the popular comedy/drama/mystery series Moonlighting. During the show's run, Willis was also hired to do wine cooler commercials.

His big break came when he played resourceful, smoking, snarky NYPD officer John McClane in the thriller Die Hard. People were at first surprised and skeptical when they heard of his casting, since he was mostly known as a funny guy, as well as that annoying guy from those wine cooler commercials. Playing McClane with a mix of humor and sympathy and performing most of his own stunts, Willis proved he had the chops as a serious action star, and Die Hard was a hit that jump-started a blockbuster franchise.

Before and following his success on Die Hard, Willis had a brief but mildly successful stint as a pop singer, most notably under the persona of Bruno.

In many of his action movies, Willis is the king of the heroic comeback, and usually has one scene where the bad guys work him over badly, only for him to come back in the final reel and win out. This was perhaps best codified in 1994's Pulp Fiction in which he plays a down-and-out boxer who bets the money he took to take a fall on himself and earns himself a very bizarre day, only to come through in the end and ride off into the future on a chopper with his girl by his side. It's also worth noting that the ending of Bruce's story arc is also technically the end of the movie itself, at least as far as the strict continuity of events is concerned.

After Die Hard, Willis had a healthy film career throughout the 1990s and going into the 2000s, alternating between action, comedy, and even straight-up drama. However, in the New 10s, his appearances were primarily in Direct-to-Video action films with few mainstream roles. By 2022, his habit of showing up for a day or two of filming on a no-budget action movie became so notorious the Razzies created a special category called 'Worst Bruce Willis Performance In A 2021 Movie' with eight nominations.note The category was rescinded following Willis' aphasia diagnosis.

In his more successful days, Willis co-founded the Planet Hollywood restaurant alongside fellow action movie titans Arnold Schwarzenegger and Sylvester Stallone. Appropriately, all three shared the big screen for the first time in 2010's The Expendables. Although Willis ended up being an Advertised Extra and Schwarzenegger merely had an uncredited cameo in this movie, in the 2012 sequel they had much larger roles that were callbacks to their film personas.

He's often dubbed by Mario Castañeda for Latin American Spanish releases of his films. On European French releases, he was almost always dubbed by Patrick Poivey (a notable exception being The Fifth Element) until his death in 2020. Other voice actors have dubbed him after that. His signature voice in Brazilian Portuguese was Newton da Matta until his 2006 death, with the second most frequent being Leonardo Camillo, who sounds uncannily like da Matta.

On March 30, 2022, several members of Willis's family posted on social media that Willis would be “stepping away from the career that has meant so much to him” due to his recently-diagnosed aphasia, which impacted his cognitive abilities. The rumors of him having memory loss had been circulating in the industry for years, and the response also lead to the aforementioned Razzies to rescind the award they gave him a week prior to the announcement.

Willis was married to Demi Moore between 1987 and 1998, having three daughters with her, including Rumer Willis.