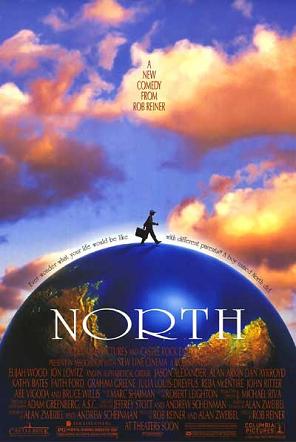 North is a 1994 film directed by Rob Reiner in what he stated was his attempt to make his own Wizard of Oz. The story is based on the novel North: The Tale of a 9-Year-Old Boy Who Becomes a Free Agent and Travels the World in Search of the Perfect Parents by Alan Zweibel, who also wrote the screenplay and has a minor role in the film.

An 11-year-old boy named North (Elijah Wood) tires of his parents (Jason Alexander and Julia Louis-Dreyfus), who never pay any attention to him even though he's a model student, athlete, and even actor. He legally emancipates himself from them, and wanders around the world seeking a new family with a deadline of Labor Day; if he doesn't find a new family by then, he will be placed in an orphanage. Along the way, he encounters parents that are Texan, Alaskan, Hawaiian, Amish, etc, and tries to blend in with each group of parents (well, not the Amish). He finally decides that his own parents are the best with the help of a guardian angel (Bruce Willis) who uses several guises throughout the film. However a conniving kid friend of his, Winchell, used the publicity North's escapades garnered to rally kids everywhere to make their parents more subservient to them. Knowing that North reconciling with his parents would undermine this, he plots to have him killed.

Not related to the film El Norte, or Norm of the North (a film of slightly superior quality). This film was also Scarlett Johansson's film debut. Additionally, Jussie Smollett plays a small role in the film.