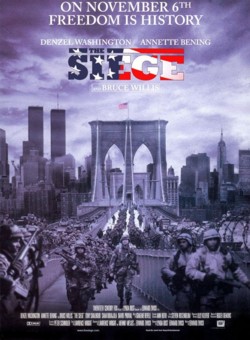 "London. Paris. Athens. Rome. Belfast. Beirut. We're not the first city to have to deal with terrorism. Tel Aviv. The day after they bombed the market in Tel Aviv the market was open and it was full. This is New York City. We can take it."
— Anthony "Hub" Hubbard, just before everyone's beepers go off
Advertisement:

The Siege (1998) is a film about terrorists attacking in New York City, made about three years before 9/11. The film was directed by Edward Zwick. Denzel Washington, Annette Bening, and Bruce Willis play patriotic characters with different ideas about the best way to defend America from terrorists.

The film opens with the bombing of an army barracks in Saudi Arabia (the actual 1996 Khobar Towers bombing that killed 19 USAF men and a Saudi civilian). There are multiple casualties and a terrorist cell led by fundamentalist Sheikh Ahmed bin Talal is blamed. The action shifts to New York where a series of terrorist incidents occur, escalating in significance. Initially handled by FBI agents Anthony Hubbard (Washington) and the Arab-American Frank Haddad (Tony Shalhoub). Later, CIA agent Elise Kraft (Bening) gets involved. Later yet, the President declares martial law and the Army's 101st Airborne Division, under Major General William Devereaux (Willis), occupies and seals off Brooklyn in an effort to find the remaining terrorist cells. Devereaux has all young males of Arab descent, regardless of ideological affiliation, rounded up and detained in a makeshift prison camp at Yankee Stadium. This only helps worsen the situation. New Yorkers stage violent demonstrations against the army and the racial profiling of the Arabs. The Army has to fight to maintain control. There are reports of Army killings. Meanwhile, Devereaux starts interrogating suspects by torturing them. In one case to death. The situation further escalates.

In hindsight, the movie treated terrorism more maturely than many films before 9/11. Unfortunately,note Or fortunately, depending how you look at it. the way the public, the government, and the terrorists acted in the film turned out to be pretty inaccurate when a large scale terrorist attack happened in Real Life. Well, mostly.

Features cameos by a young Aasif Mandvi and Bill Clinton.