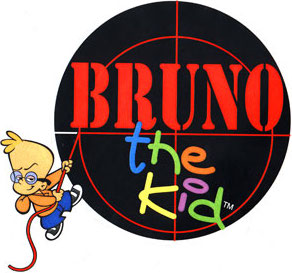 Bruno the Kid is a cartoon starring Bruce Willis as the voice of an 11-year old boy who becomes a top spy for a secret espionage organization. The organization, named Globe, contacts Bruno via his computer and a special gadget watch, and are completely unaware of their top spy's young age as he hides behind a computer simulated avatar of a full grown man (in the image of Bruce Willis).

The members of Globe that Bruno works with in person, such as Jarlesburg (voiced by Tony Jay) and Harris (Mark Hamill), are unaware that Globe do not know Bruno's actual age, and assume that the organization must know what they are doing sending the boy into dangerous situations.

The episodes consist of Bruno managing to live a double-life without his parents' or friends' knowledge. In one episode, he tells his parents that he is camping in the garden and he sets up a torch to project a fake silhouette of himself onto the side of the tent so that it looks like he is inside it. Meanwhile, with an alibi set up, Bruno will be out saving the world or foiling a major heist with the aid of his British spy partner Jarlesburg. Along the way they usually meet Harris (a spoof of the character 'Q' in the James Bond books and films) who supplies Bruno with gadgets which Bruno usually finds a use for later on in the episode. As well as voicing the title character, Willis was one of the executive producers and also co-wrote and sang the theme song for the show with backing singers.

If you're having trouble remembering it, don't be surprised. The show was syndicated and one of the lesser known ones of its time, having only lasted one season and 39 episodes. It had a few VHS releases which of course are out of print now.