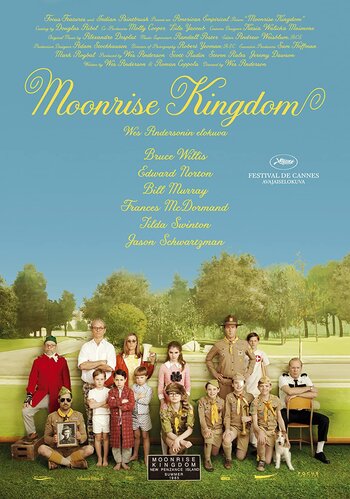 Moonrise Kingdom is a 2012 tween comedy-drama film by Wes Anderson.

Set in a 1965 New England island town, the movie follows an innocent and quirky Puppy Love and Coming of Age story between Sam and Suzy, a pair of 12-year-old social outcasts who try to run away together.

Sam is an orphan who has gone through several foster homes, and is now a member of the Khaki Scouts, but has difficulty fitting in. Suzy is living with an incredibly dysfunctional family, where the unfaithful mom's a control freak and the dad is distant, and both deem her "troubled". After a year-long correspondence, they both decide to run away, and the film follows them as they hike across their island - with the police chief, the scoutmaster, Suzy's parents, and Sam's fellow Khaki Scouts all in hot pursuit. While the bulk of the movie is carried by the two leading child actors, the movie has an All-Star Cast in the adult supporting roles with Bruce Willis, Bill Murray, Edward Norton, Frances McDormand, and Tilda Swinton.

The film opened the 2012 Festival de Cannes. In a similar vein to The Darjeeling Limited, Wes Anderson also shot a four-minute short to complement the main movie, which can be seen here.