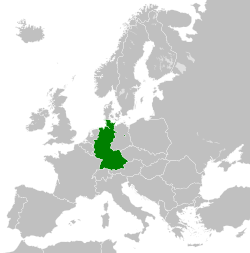 Called the Bonn Republic these days by historians, the Federal Republic of Germany (Bundesrepublik Deutschland) was formed out of three of the occupation zones of Germany in the aftermath of World War II, the other becoming East Germany. This didn't happen overnight - the British and American zones were merged, informally very quickly after the war and more formally combined into something called at the time "the Bizone" or "Bizonia" by 1948 or so, with the French zone allowed in just before the formation of the Bundesrepublik itself in 1949. The Saarland, separately occupied and disputed by France, joined in 1957 after the residents were allowed to vote on which country they wanted to be part of. This is sometimes referred to in modern times as the kleine Wiedervereinigung ("Little Reunification").

West Germany became a democracy and an economic superpower. It joined NATO and had a considerable number of foreign military bases there. The bridges had speed limits for tanks (and still do in The Berlin Republic), because World War III would have been fought there.

West Germany had the legacy of the Second World War to deal with. They implemented a No Swastikas policy and banned all vaguely Nazi organisations. West Germany also became a pretty peaceful nation, not getting involved in any foreign wars. This didn't stop East Germany from calling them fascists on a regular basis; the Berlin Wall was called "der antifaschistische Schutzwall," literally meaning "the Anti-Fascist Protection Barrier." The GDR regime also had a field day any time when real or supposed connections of high ranking West German officials to the Nazi Era became public and they often leaked documents from Soviet Archives or the likes to the press themselves to land a propaganda coup. That said, the GDR itself had quite a few old Nazis in high ranks of army state and party in the 1950s and early 1960s.note For both nations, Fridge Logic has to come into play. The vast majority of Germans of legal age in 1949, and virtually all who would have the knowledge, skill set and experience to run major governmental institutions, would have had at least a tangential relationship to the Hitler regime, the only exceptions being political exiles or those imprisoned by the regime for being of other political parties. So there was no escaping the reality in either FRG or GDR that complete denazification of the newly-minted governments was not practical absent letting the Occupation powers run things for a generation or two. That said, it was often more of a hindrance for a post-war career to have been an exile or imprisoned during the Nazi era, especially in the West. Sometimes the same judges that had ruled to take away rights or property from dissidents ruled after the war that they had no right to restitution.

It considered itself a reconstituted Weimar Republic (despite the irony of Weimar now being in East Germany), deciding to pay reparations for both wars and keeping the D license plate. It also elected to pay reparations to Israel starting in 1953 as penance for The Holocaust (and on a more practical level, payment for the labor and property stolen from Jews by the Nazis); Germany remains Israel's foremost advocate in Europe to this day, and has discovered rather interesting ways to show its sorriness to Israel (including giving the IDF nuclear-capable submarines). The de facto capital of West Germany was Bonn, although Berlin was symbolically named the de jure capital in the Basic Law. West Berlin, an occupied city, sent non-voting representatives to the West German Parliament.

West Germany also developed culturally, with West German literature, philosophy, films, and music making their mark. On the high end, the likes of Gruppe '47 (including, most famously, Günter Grass) pointed the West German reaction to the horrors of World War II (in essence, "we were guilty and foolish, all of us!") and the process of denazification (they were for it). On the pop-cultural level, The Beatles and countless other British bands had their first breaks in Germany—typically Hamburg—and the West Germans were the first Continental Europeans to really get what this "rock" thing was all about. The West Germans returned the favor: late '60s and early '70s West German rock (called "Kraut Rock" by the British music press), led by bands like Neu!, Amon Düül II, and early Kraftwerk, had a powerful impact on Post-Punk, New Wave, Electronic, and Industrial music. West Berlin in particular was famous for both its rollicking club scene and its Hansa-By-The-Wall (yes, that Wall) recording studio, which was a magnet for musicians German and non-German alike. David Bowie spent most of his most productive and creative period in West Berlin (termed, fittingly, his "Berlin period"), inspired by the West German scene. Iggy Pop was similarly inspired, recording part of his debut album and all of Lust for Life (you know, the famous one) at Hansa-By-The-Wall.

On another cultural note, the West Germans also managed to create a brilliant national soccer team, winning The World Cup in 1954, 1974, and 1990 (just before reunification). The win in 1954, against Hungary, was a massive boost to West German pride (which until then had been rather shaky), and was seen as a moral victory for the West over the Soviet bloc.

Older sources will sometimes refer to this place as simply "Germany", possibly due to the feeling that this was the real Germany- the other one was just Commie Land with Germans. (This is similar to how South Korea is sometimes referred to as just "Korea", based on much the same attitude about North Korea.) Bonn itself felt that for a while, refusing to recognise any country bar the USSR that had any relations with the GDR until Willy Brandt's Neue Ostpolitik of the 1970s. The two Germanys recognised each other (but not completely: for example, no ambassadors, but permanent representatives [Ständige Vertretung] – this would become important in 1990) and joined the United Nations together.

In the early 1980s, it was a site for the US Cruise and Pershing II deployments, something that caused considerable anxiety in a country that would have had nukes from both sides land on it in a nuclear war. In 1986, Chancellor Helmut Kohl announced the unilateral removal of those missiles- a year later the entire lot were got rid of under the INF Treaty.

The West German Basic Law was aimed at the reunification of Germany. When Germany reunified, East Germany was merely absorbed into West Germany, creating the reunified Germany- The Berlin Republic. The Basic Law stayed in place with minor changes as it had served the country well. While Article 23 was changed (which allowed for Germany to be reunified without major changes to the constitution - something which was seen as obsolete with reunification complete) Article 146 notably wasn't - meaning the German constitution still contains a paragraph that details how it could be replaced by a new one (this was intended as the other avenue to reunification and is sometimes brought up by populist or opposition politicians)