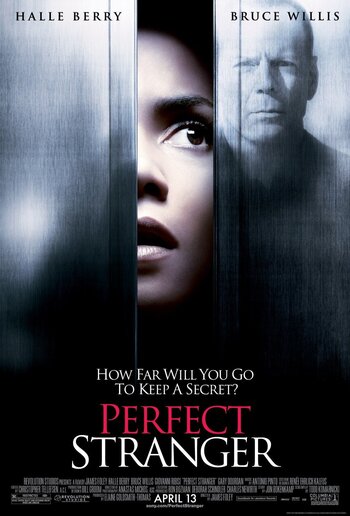 "It starts with a quiet hum, an empty screen inviting you. 'Come inside', it says, 'we're always open'. It's a world, where actions have no consequence, where guilt is cloaked by anonymity, where there are no fingerprints. An invisible universe, filled with strangers, interconnected online and disconnected in life. It will steal your secrets, corrupt your dreams and co-opt your identity. Because in this world, where you can be anything you want, anyone you want, you just might lose sight... of who you are."
— Rowena Price
Advertisement:

A few days later, Grace is found dead, drowned and poisoned with belladonna, and it is also found out Grace was in her first trimester of pregnancy, leading Rowena to suspect Harrison. With the help of researcher Miles Haley (Giovanni Ribisi), Rowena goes undercover as a temp at his company, and enters into a game of cat-and-mouse.

"You once told me that all it takes for a perfect murder are the right ingredients at the right time."