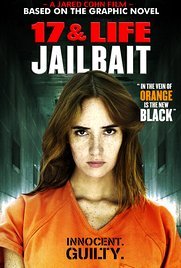 Jailbait is a 2014 Girls Behind Bars Exploitation Film by The Asylum, based on the graphic novel 17 & Life: Jailbait.

Anna Nix, gifted student and cello player, accidentally kills her stepfather in self-defense when he tries to rape her. Due to her mother denying that the stepfather did anything to her, Anna is sent away for 4 years in a maximum security facility for involuntary manslaughter. There, she has to find her place in the hierarchy of the jail and figure out how she's going to survive.