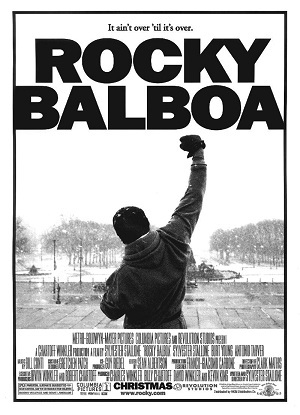 "You know all there is to know about fighting, so there's no sense us going down that same old road again. To beat this guy, you need speed - you don't have it. And your knees can't take the pounding, so hard running is out. And you got arthritis in your neck, and you've got calcium deposits on most of your joints, so sparring is out. So, what we'll be calling on is good ol' fashion blunt force trauma. Horsepower. Heavy-duty, cast-iron, piledriving punches that will have to hurt so much they'll rattle his ancestors. Every time you hit him with a shot, it's gotta feel like he tried kissing the express train. Yeah! Let's start building some hurtin' bombs!"
— Duke Evers
Advertisement:

The one where Rocky returns.

Rocky Balboa (2006) is the sixth installment in the Rocky franchise that began with the Academy Award-winning Rocky thirty years earlier in 1976, written, directed by, and starring Sylvester Stallone who reprises his role as the title character.

The film catches up with Rocky Balboa two decades after the events of Rocky V. Having become something of a living landmark in Philadelphia, Rocky runs a small but successful Italian restaurant where he tells old boxing stories to his customers. However, in his private life, Rocky still grieves over the death of his wife Adrian from cancer several years prior, and has an estranged relationship with his son Robert (Milo Ventimiglia), who has an unhappy life as a mid-level corporate employee.

Meanwhile in the boxing world, the reigning World Heavyweight Champion, Mason "The Line" Dixon, celebrates an incredible professional career but is frustrated with his public image. A long record of fast and decisive victories has left fans, pundits, and even his closest managers believing that his opponents were weak, feeding into a derogatory perception that Mason is a mediocre champion who couldn't handle a truly powerful adversary. This tension comes to a boiling point when a television show uses a computer simulation to pit a virtual Mason against an in-his-prime Rocky Balboa, leading to Mason's defeat via knockout.

Rocky is inspired by the computer simulation to re-apply for his boxing license so he can tie up the last few loose ends in his life. Although Rocky had only intended to fight in small local events for fun and charity, he is quickly approached by Mason's managers who want to stage a real version of the computer simulation as a high-profile charity exhibition match. The film follows both Rocky and Mason as they prepare for the bout: Rocky using it to fulfill his dream of one last great match, and help restore his relationship with Robert; and Mason fighting to earn the respect he is owed from the world through a trial-by-fire from one of boxing's most respected champions.

The film was intended to be the true ending to the franchise, serving as a coda to the series — it even ended with a tribute to the longtime fans of the series by showing them running up the famous steps themselves. Eventually a sequel/Spin-Off film called Creed, with Stallone reprising the Rocky character and focusing on the son of Apollo Creed (named Adonis), was released in November 2015. Stallone has discussed making a seventh film in the main series

, taking place after Creed II but separate from the Creed saga.