Second Place Is for Winners 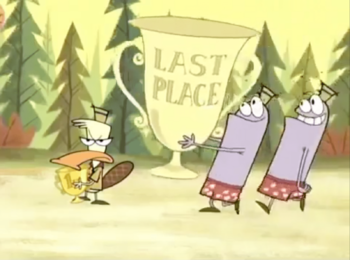 "The witches show off tricks and spells developed during the year in a spirit of friendly co-operation (har har) to see who is going to come second to Granny Weatherwax."
— Nanny Ogg's Cookbook
Advertisement:

A character enters a contest where the nominal first prize isn't actually their preferred one, so they'd be happier winning second place or maybe doing even worse.

In real life, some contests avert this by allowing winners to choose a prize out of all the prizes the people who placed below them could get, or just making every prize include all the lower-place prizes.

As the outcome is often plot-important, beware of unmarked spoilers.