Worf Had the Flu 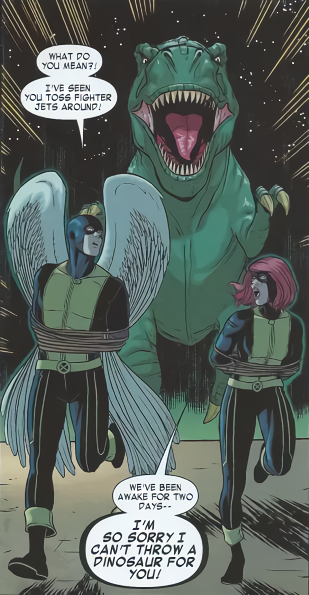 "It was an opponent Nanoha wouldn't have had any problem protecting her allies from or defeating if she had been her usual self. But the strain of overexerting herself made Nanoha less capable, and her body slowed down at a crucial moment. The result... was this."
— Shamal, Magical Girl Lyrical Nanoha StrikerS
Advertisement:

This is the specific rationalization that an otherwise powerful character suffering from The Worf Effect or a Curb-Stomp Battle did so only because something (artificially) undermined their performance. The insinuation, of course, is that it probably wouldn't have happened this way under "normal" circumstances. It may or may not be a fandom-based Author's Saving Throw.

This is often used within fandom, and can be a satisfying answer for fans bothered by the outcome of the battle or use of the trope itself. As the 'flu' is generally pulled from something within the story, explicit or otherwise, it does not necessarily require a blatant Retcon or Canon Discontinuity — the event itself is still treated as canonical. Note, however, the new reason may not officially be, except as a passing Ascended Fanon by some writers.

Whether or not a later matchup is provided becomes irrelevant. If enough ire is raised from using the Worf Effect, a later matchup may be specifically avoided to dodge any mention of it at all. On the other extreme, the response to the trope may be too loaded with Take That! overtones not to come off as petty. In contrast, a well-written Evasive Fight-Thread Episode often includes 'flu' logic in an effort to quell any complaints about the match-up. Essentially the "Power Seep" part of Power Creep, Power Seep.

This Flu is also often exploited by a nasty Big Bad Wannabe in order to have a shot to kill those powerful people, through luck mostly. Of course, defeating those who had flu doesn't mean you are that trope. With planning and exploiting this 'Flu', one can avoid being labeled of that trope. A true Blood Knight never takes on a Worthy Opponent who is suffering under such circumstances, as they typically wish to fight them in their full power.

A type of Drama-Preserving Handicap. Compare Actually a Doombot. Contrast Handicapped Badass, when they managed to win despite their flu. Compare with I Am Not Left-Handed when the flu is self-imposed. Compare Working Through the Cold when the character chooses to soldier on despite the handicap.