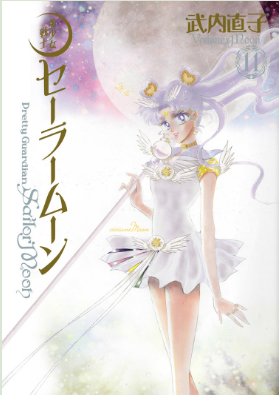 Crystal Tokyo has existed in peace for centuries-so peaceful that there hasn't even been a need for Sailor Senshi to defend it. Ever since they were reborn through the power of the Galaxy Cauldron the senshi have lived peaceful lives as Neo-Queen Serenity's court. However, the peace is shattered when one final servant of Chaos possesses Hotaru, and now they must fight one last time, facing some uncomfortable truths in the process.

Cosmos Arc is a continuation of Sailor Moon done by VivianexMoon. Unusually for a web comic, it isn't drawn by her, but brought to life using the canonical artwork in the manga (and at least one other work by Naoko Takeuchi) and Photoshop. It's meant to explore some of the ramifications of Usagi's choices in the manga, and answer a question that's existed since the end of Sailor Moon: just who is Sailor Cosmos?

Cosmos Arc can be read here

A prequel, Chaos Arc, detailing the origins of Chaos and Queen Serenity's tenure as a senshi, had been planned, but will only be posted as artwork and a condensed version as the epilogue to Cosmos Arc as VivianexMoon wishes to concentrate on other projects for now.

Warning: Unmarked spoilers for the end of Sailor Moon below.