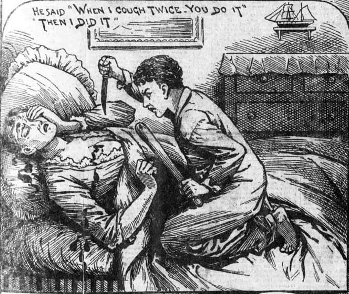 Matricide, the killing of one's mother, is considered among the most heinous crimes throughout history. Killing either one of one's parents (or both) is obviously a traumatic experience that in usual circumstances only comes about as a result of great turmoil between parent and child. Whereas Patricide carries the connotations of killing one's clan leader (or an Oedipus Complex when it's an addendum to earning the love of the mother figure), disposing of dear old mom is possibly even more extreme. After all, this is the woman who carried that person to term for nine months and then took care of them for years afterwards, so it takes an exceptionally heartless character to cross that line.

This can be variously played depending on how sympathetic the mother as well as the child who is committing the act are. Even when the mother was an Abusive Parent or Evil Matriarch, or tried to kill her offspring first, it can cause intense grief that will stay with the character for years or end in their self-destruction. For an Antagonistic Offspring it can be the ultimate way to defy Even Bad Men Love Their Mamas, being played for horror rather than drama.

Also, the trope's flavor is different depending on the age of the murderous child and the child's gender. Young children who kill their mothers are often seen as evil incarnated in the body of a child or the result of Demonic Possession. A grown woman killing her own mother can be an extreme result of the Electra Complex (the Distaff Counterpart to the Oedipus Complex) or more often the deed of The Evil Princess or if the woman's mother's death is the condition for inheritance. A grown man killing his own mother with his own hands is very rare and almost always the mark of a Complete Monster or the result of an Accidental Murder.

When people equate this to Death by Childbirth, the result is Maternal Death? Blame the Child!.

Subtrope of Self-Made Orphan and Murder in the Family. Distaff Counterpart to Patricide. Contrast Offing the Offspring.