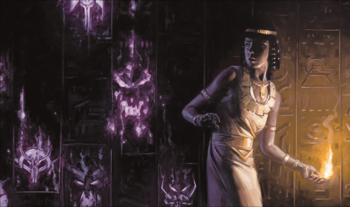 "Upon all whom you love my thought shall weigh as a cloud of Doom, and it shall bring them down into darkness and despair. Wherever they go, evil shall arise. Whenever they speak, their words shall bring ill counsel. Whatsoever they do shall turn against them. They shall die without hope, cursing both life and death."
— Morgoth, The Children of Húrin
Advertisement:

Curses are a very old trope. Very old, as in Ancient Egypt old. They served as warnings to listeners against defying morality or doing the taboo, for fear of angering the gods and incurring some terrible punishment. What might bring down a curse? It depends entirely on the story. Eating Forbidden Fruit, crossing that bridge after midnight, speaking out of Pride or even unkindness to strangers can trigger a curse.

The curser might be a petty god, a witch, or even a normal person driven to great anger. Words and Language have power, especially spoken from the heart. Doubly so if the heart is filled with bitter rage. Triply so if the person is dying. But even in ordinary circumstances, Be Careful What You Say, or you may well cast a curse on a loved one. For that matter, if you make The Promise and say, "May [curse] fall on me if I fail!" you can curse yourself. Or the curse might not be cast by anyone at all, it may well be a 'maliceless' effect of breaking some taboo. And there's no guarantee that the cursed person is the offender; a Hereditary Curse may steadily descend through a family.

The effect of the curse on a character and story is that of a potent driving force. Getting rid of it can drive a character to do great and terrible things. Enduring one can add drama and complicate a hero's life. Resolving it is cause for a satisfying resolution. Whatever the case, curses aren't minor things.

Curses can come in all shapes and sizes. Common curses include:

Curses can also be put on inanimate objects, such as swords, and places, both houses and lands. Places tend to turn to Mordor under curses, or at least smell bad, and both places and objects inflict bad things on the people about, or owning, them.

Curses can be cut short by:

For some reason, a curse that turns you into a member of the opposite sex is particularly hard to break, doubly so if you were a man.

It isn't awesome and was not meant as a blessing, this is a wicked spell intended to harm or even kill the cursed character. A common variant is the Gypsy Curse. The Production Curse is this applied to the people involved in developing a product. Contrast the Protective Charm, which can block or lessen curses. See also One Curse Limit, in which a victim can only suffer a single curse at one time. See also Curse That Cures, when a character seeks out a curse because it will cure them of a sickness or injury as a side effect, or Geas, which is a curse that someone must constantly do on their own, or else die. See also Prayer of Malice, where someone petitions a generally benevolent deity to curse someone instead.

The Jester was forced into his role by his sister the Wicked Witch of the West. He is unable to remove his outfit, any attempt puts him in a differently colored version of it.

The Jester was forced into his role by his sister the Wicked Witch of the West. He is unable to remove his outfit, any attempt puts him in a differently colored version of it.