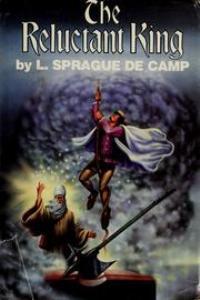 The 1983 omnibus edition
A Heroic Fantasy trilogy by L. Sprague de Camp, The Reluctant King consisted of the following books: The Goblin Tower (1968), The Clocks of Iraz (1971) and The Unbeheaded King (1983). They are part of de Camp's larger Novarian series that includes the prequels The Emperor's Fan (1973) and The Fallible Fiend (also 1973), plus a later sequel, The Honorable Barbarian (1989). In them, other characters are featured with stories in the same universe told. In 1983, the first trilogy was collected with an omnibus edition by Science Fiction Book Club. Later, Baen Books reissued them in 1996.
Advertisement:

The city of Xylar has an odd political system. Kings are chosen there every five years through catching the previous king's head when he's beheaded. After that time ends, the same ritual is repeated and they're replaced. Jorian, who'd been king for the last five years, isn't happy with the matter. Thus he leaps at the chance to escape that Dr. Karadur, a wizard, offers him in return for helping him acquire a magical artifact, the Kist of Avlen. Fleeing from his homeland, Jorian goes on a long series of adventures with Dr. Karadur, encountering many threats along it, traveling into many lands and encountering many strange things.