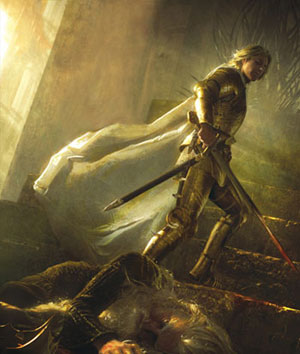 Turns out when you pull a Bodyguard Betrayal on the king himself, even his enemies won't let you Live It Down.
"I'm the bloody Kingslayer, remember? When I say you have honour, that's like a whore vouchsafing your maidenhood."
— Jaime Lannister, A Song of Ice and Fire
Advertisement:

In fiction, oaths are powerful things. They bind demons. They bind honour. They create pacts that grant great power. They are things to be respected, feared, and fulfilled. And then there is the Oath-Breaker. This is a character that has broken an oath of some sort, be it magical or mundane, and now is forever branded by his misdeed. Sometimes they see this as almost a trophy, sometimes this is seen as a mark of shame. It almost always brands the character as a pariah until they manage to restore their lost honour.

This is not just a character that has broken a social taboo. They need to have broken something that they have personally sworn. May be the result of a Frequently-Broken Unbreakable Vow.

Some characters will feel this even after Releasing from the Promise or the oath's becoming impossible to fulfill. At other times, such a character is a Dangerous Deserter.

It is not unknown for a character to beg another to allow something that would technically fulfill the vow to avoid this.

Often follows from someone giving a Blood Oath, Heroic Vow, or Rash Promise. It might even involve something as simple as a character saying I Gave My Word and going back on it.