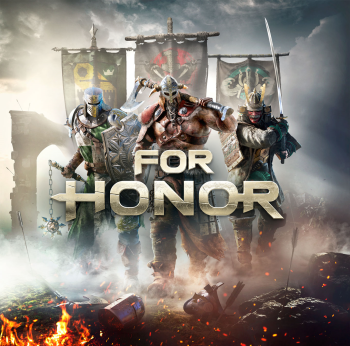 We all die. Some live forever.
“Honor. What do you know about honor, you who has never faced true fear? Learn what honor is before pretending you are a warrior. Know this before you step onto that thin red path where no misstep is allowed. The path that only ends when your legs fail to support you, and your heart stops beating. The path where sadness goes along with pain and where glory is the color of blood. This narrow path only goes one way, a way covered with enemies and brothers. And it will take you without any shame into the hands of death for the name you were given and for your descendants. For honor.”
Advertisement:

For Honor is an original property made by Ubisoft Montreal and announced at E3 2015 on June 15, 2015. It is a competitive third-person melee fighting game mixing speed, strategy, and team play with visceral close range combat in multiplayer action.

The sound of shouting and clashing metal fills the air. Fallen enemies and allies alike litter the battlefield. Every encounter is a brutal, tactical fight to the death. Kill or be killed. For Honor puts a blade in your hand and sets you loose in a medieval battle.

Players side with one of three factions - the Legions (Knights), the Warborn (Vikings), or the Chosen (Samurai) – duel one another for control of the battlefield. The game takes place in a low fantasy universe where these three Fantasy Counterpart Cultures exist next to each other and are locked in an endless war with each other.

The game uses an innovative combat system called the “Art of Battle”, where players lock on to their dueling opponents and can then choose to position their weapon from above, left, or right, able to attack, defend, or deflect enemy attacks on the same position. The addition of dodging, movesets, and guard breaks make fights more complex and skill-based, where fights are not determined by random button mashing, but careful observation and prediction of enemy stances and movement, and the fate of the fight could be decided in just a single mistake.

The game also has a story mode, where the three factions fight not only one another, but also the bloodthirsty warlord Big Bad Apollyon. It was released for the Xbox One, PS4, and PC on February 14, 2017.

Over the course of the first year after release, six new heroes (two per faction) were released. An update for Year Two, Marching Fire, was released in 2018, containing a Chinese faction known as the Wu Lin, and a new 4v4 Breach mode. 2019 saw the start of Year Three, known as the Year of the Harbinger, was released, bringing four new heroes (one for each faction). In 2020, Year Four started, with the seasons of Peace, Tyranny, and Resistance, and included the new Warmonger hero.

Also in 2020, the Warden was introduced as a Guest Fighter for Samurai Shodown.