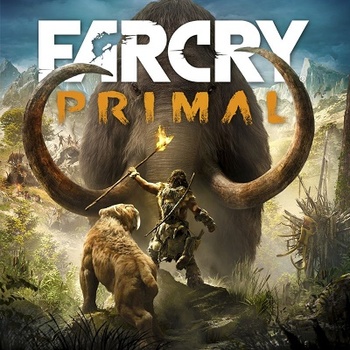 Rise above extinction.
Far Cry Primal is the fifth game in the Far Cry series, taking place at the end of the last Ice Age 12,000 years ago during the Mesolithic.
Advertisement:

You play as Takkar (Voiced by Elias Toufexis), part of a hunting party of the Wenja tribe, heading to the formerly ice-covered valley of Oros in what will one day be called Europe. There the bulk of the Wenja have already settled and the starving hunting party hopes to rejoin their kin. An unfortunate encounter leaves Takkar the sole survivor of his hunting party and soon learns that Oros is not the peaceful settlement he was hoping for. The Wenja tribe's village has been destroyed, and the surviving Wenja, now leaderless, are scattered across Oros where they are being picked off by two rival tribes: the cannibalistic Udam and the Izila slavers. It's up to Takkar to rebuild the Wenja village and re-unite his people, do battle with the rival tribes and deal with the valley's numerous natural hazards to conquer the Valley of Oros for the Wenja and secure their survival.

Taking place so long ago, this is the first Far Cry game to not feature any firearms. Takkar needs to use a variety of bows, melee & thrown weapons, as well as the help of predators he can learn to tame. The game thus puts a larger emphasis on hunting, gathering resources, and crafting than its predecessor.