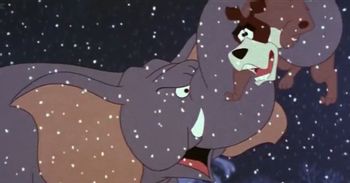 Where's a mouse when you need it?
"There are no animals more misunderstood than elephants; they are naturally savage, wary, and revengeful; displaying as great courage when in their wild state as any animal known."
— Samuel White Baker, "The Rifle and The Hound in Ceylon"
Advertisement:

Elephants, and their prehistoric relative, the mammoth, are usually seen being wise and honorable. They're herbivorous, intelligent and come off as the gentle giants of the savanna. Not all elephants in fiction are characterized like this, though. With their size, their formidable-looking tusks, and their ability to overpower just about any other animal they encounter, elephants can just as easily been seen as intimidating, and they are often portrayed as such in fiction. Consequently, there are numerous portrayals in fiction of elephants that are aggressive, hostile, and at least morally ambiguous. These elephants like to throw their weight around, usually depicted as bullies or The Brute, though they're just as capable of being intelligent, making them the Xenophobic Herbivores at worst.

Antagonistic elephants in fiction are rarely portrayed as outright evil, but they will often be unstoppably aggressive and ready to charge at anybody who so much as looks at them funny. If they get sufficiently agitated, they'll go berserk and try to trample and crush the unfortunate protagonists, while also possibly trying to spear them with their tusks. The intelligence and wisdom common to most sympathetic portrayals of elephants is usually nowhere to be found in these cases, unless the writer is playing up the It Can Think angle. War Elephants are especially prone to this sort of portrayal. Either way, if the characters in a story encounter an angry elephant, it's a sure sign that something really bad is about to happen. And Heaven help them if they manage to piss off an entire herd. While violent and aggressive elephants in fiction aren't Always Male, they're more likely to be on average than fictional elephants as a whole, presumably because it's the males who have the biggest, scariest-looking tusks. May also overlap with Evil Versus Evil if they co-exist with dirty rats.

There is some Truth in Television, as adolescent male elephants have been known to bully and kill rhinos and other animals for their amusement.Note This is likely due to poachers killing older elephants, who take charge in educating and disciplining youngsters. Orphaned baby elephants, without guidance from elders, essentially grow up into the savannah equivalent of teenage delinquents, known for abnormal displays of aggression to other animals, and humans as well. As for why rhinos—it turns out that rhinos are really, really stupid. Male elephants also go into a state called musth (caused by a periodic increase in male reproductive hormones), which makes them extremely Hair Trigger Tempered and aggressive toward both people and other animals.

Elephants also account for the most deaths in zoos on a yearly basis. The Elephant Database

has records of nearly 250 elephants that killed at least one humannote Keep in mind that some of this is not due to outright aggression, but the simple fact that elephants are very big and powerful animals. Even a simple flick of the trunk can easily crush a keeper. "An elephant never forgets" is literal advice for zookeepers, as in "Don't mess with an elephant, because one day, somehow, they'll get you back, and the consequences will be deadly." Heck there’s more truth to this as elephants were used as methods of torture and capital executions.

The elephant-like Gohma Crusher comes for the souls of the human village.

The elephant-like Gohma Crusher comes for the souls of the human village.