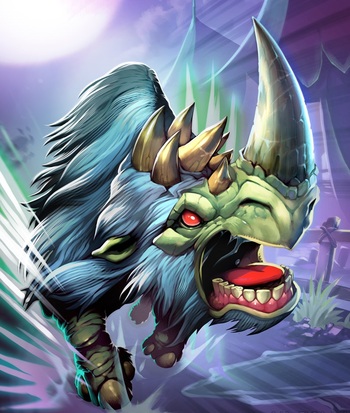 CHAAAAAAAARGE!
"Love is like a rhino, short-sighted and hasty; if it cannot find a way, it will make a way."
— Magic: The Gathering card "Crash of Rhinos"

When portrayed in the media, rhinos are always hulkingly big, heavy, and intimidating herbivores that are known to have bad eyesight, short tempers, and a tendency to run down and trample (or gore to death) things that piss them off. They're not very smart, but they always use their heads. They are one of the truly badass species of animal in the world. If they appear in a game, expect a Smash Mook or maybe a Bullfight Boss. If they are in a group, they are likely to go on an Animal Stampede. If they're depicted in fiction, they're likely to be a dangerous obstacle. If it's a comedy, expect to see someone sent flying.

In Real Life, a rhinoceros is essentially an armor-plated cow (though as an odd-toed ungulate, it's more closely related to the horse and the tapir). It isn't anywhere near as aggressive or mindlessly violent as it's been portrayed in the media. It can still be a dangerous animal, but by far more humans are killed each year by elephants and hippopotami (and cows). In fact, humans are probably more dangerous to it because all of the living species of rhino are endangered due to poaching and habitat loss. Baby rhinos are especially vulnerable and need to be watched and cared for 24/7, otherwise they'll literally die from the stress of being alone.

Fun fact: A group of rhinos is called a "crash". Three guesses why (and the first two don't count)...

When a more exotic, powerful or environment-specific variant is desired, woolly rhinos

may sometimes be used in lieu of the regular sort.

Not to be confused with the Rhino tank in the Grand Theft Auto series. Despite the fact that a good deal of players spent most or all of their playtime spawning a Rhino with a cheat code and going on a rampage.

See also Brutish Bulls and Full-Boar Action for similarly violent and aggressive fictional ungulates and Temper-Ceratops for horned dinosaurs with similar stock behaviors. Contrast Honorable Elephant and Huggy, Huggy Hippos, since rhinos are often portrayed as the Unpleasant Animal Counterpart to elephants and hippopotamuses. However, elephants and hippos are not immune to this portrayal themselves.