Web Animation / The Rhino And The Redbill 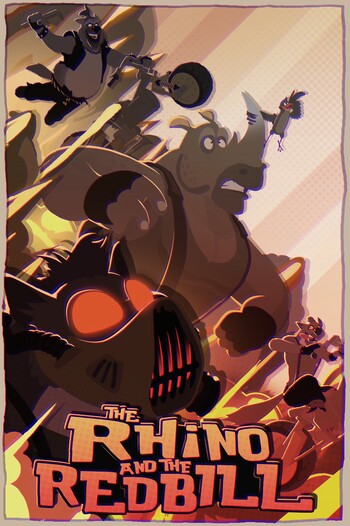 Red: I'll be on the lookout. Everything's completely safe.
In the wild, Rhinos and Red-Billed Oxpeckers have a very unique symbiotic relationship. The oxpeckers spend their day nestled on top of the rhino for food and protection, and in return they help to alert the often visually-impaired rhinos if there is danger in the area. They can however, be a nuisance to their hosts, often picking at wounds when searching for food, and their bond can quickly turn parasitic
Advertisement:

The Rhino and The Redbill (also known as Tales from Scorchwater Valley) is a canadian CGI web animation pilot by Alex Henderson. Originally funded by Kickstarter in 2020 (even before that, it had a failed campaign in 2018, when the project was called "The Rhino and The Oxpecker"), it was released on Youtube and Newgrounds on February 15, 2022.

The story, based off the symbiotic relationship between the two titular species in real life, follows Niles, a blind but kickass rhinoceros, and Red, a flightless red-billed oxpecker, working together to survive the drought-ravaged wasteland that is Scorchwater Valley and find somewhere safe to live on it. Their deal is it as follows: Red serves as the guide and navigator for Niles, and in return the rhino promises to help his bird friend to traverse the dangerous valley and possibly raise an unhatched egg together. However, with their respective physical disablities, their conflicting personalities and the fact that EVERYONE is out to get them, this will prove to be a difficult task.

), but the creator has stated that it would serve as a proof of concept for producing more content with the characters in the future.

The Rhino and The Redbill provides examples of: