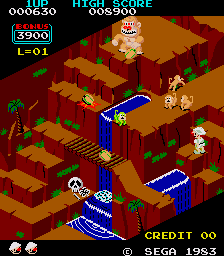 In Sega's Congo Bongo (known as Tip Top in Japan), you're a safari adventurer who, one day, got you and your tent burnt in fire, no thanks to the mischief of the ape Congo. Seeking for revenge, your goal is to catch this ape and return the favor.
Advertisement:

Congo Bongo is a 1983 action platformer released for arcades, and is very obviously inspired by Nintendo's hit Donkey Kong, down to having four levels in total. The biggest difference from it is that the stages in Congo Bongo is projected under isometric perspective, taking the idea from Sega's own Zaxxon.

While the game may not be quite as well-known as Nintendo's counterpart nowadays, it was still very popular back then, ported to almost every system available at the time. An emulated version of arcade game was included in Sega Genesis Collection and Sonic's Ultimate Genesis Collection, while an enhanced remake was created for PlayStation 2 under Sega Ages label in 2005.