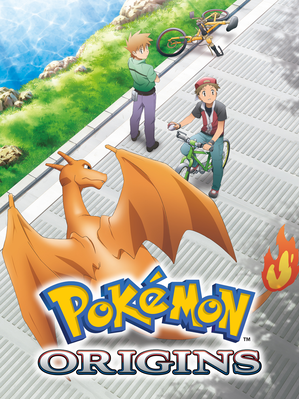 Pokémon Origins (known as Pocket Monsters: The Origin in Japan) is a Pokémon OVA/four-episode Mini Series, made to assist in promoting Pokémon X and Y. It aired on October 2nd, 2013 in Japan and began streaming on the North American official site in mid-November of 2013. Following the long-running Pokémon: The Series itself, Pokémon Origins is the second animated adaptation of the original Pokémon Red and Blue (preserving more of the plot of Red and Blue/Green while mixing in elements of Pokémon FireRed and LeafGreen as well as Pokémon HeartGold and SoulSilver) games featuring Red, his rival Blue Oak, and their adventures across the Kanto region. The animation was split among three studios, Production I.G, OLM Incorporated and Xebec* with further assistance by Studio Izena on the latter's episodes.

The official trailers can be viewed here: 1st Japanese trailer

webpage, and they can now be found

on Hulu and on iTunes

Compare and contrast to Pokémon: The Series, in addition to Pokémon Zensho, a manga based off Red and Green that is similarly (if not more) close to the source series.

A successor series of 3 to 5 minute shorts, called Pokémon Generations, released online in 2016. Aside from being closer to the games, the two series are unrelated.

This Animation contains examples of: