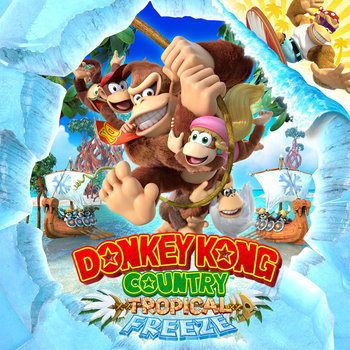 The Kongs have landed in the coolest Country yet!
Advertisement:

The Snowmads, a horde of rampaging Vikings from the frigid northern seas, invade DK Island and kick the Kongs out of their home—and on Donkey Kong's birthday, no less. Donkey, Diddy, Dixie, and Cranky must then trek across six different islands to reclaim their turf (and undo the magic spell that's turned it into an icy tundra).

In May 2018, an Updated Re-release of the game for the Nintendo Switch was released, with the biggest addition being that Funky Kong, like Cranky before him, had been Promoted to Playable, with his surfboard providing many unique abilities for him to use.

Tropes featured in Tropical Freeze include:

Cranky Kong: Bah! You kids and your high-definition video games. Back in my day, we didn't have any definition!
Feedback