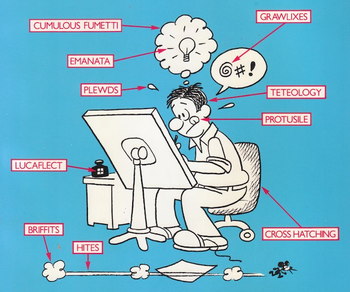 "As can be seen, without proper familiarity with the graphic symbols, a comic sequence such as this would make no sense whatsoever. Lord knows, we don't want that."
— Berke Breathed
Advertisement:

Mort Walker of Beetle Bailey and Hi and Lois fame is also credited with creating a bunch of nonsense words for the shorthand symbols used in Newspaper Comics. In 1980 he released a book called The Lexicon of Comicana that listed and defined all of these terms. Many of the terms were adopted by other cartoonists, and even incorporated into cartooning how-to books, although those of us outside the industry (or just preferring to not sound crazy) will usually still use expressions like "dust clouds" and "motion lines".

Not all those phenomena are comic-exclusive. Some of these can also be found in cartoons, other media or internationally recognized symbols.

This is a list of some of the more well known ones:

Agitrons: Similar in function to blurgits, longer wiggly lines around something that is shaking or vibrating.

Blurgits: Similar in function to agitrons, parenthesis-shaped symbols used to indicate less intense movement, such as a nudge, shoulders shrugging, or slow walking (in a waist-up shot).

Briffits: Clouds of dust that trail behind fast-moving characters, linger in the spot where a character suddenly dashed out of frame, or appear in clumps when objects or characters collide. Car exhaust can serve as a more realistic version of this.

Dites: Similar to vites, diagonal lines placed across glass surfaces (either reflective or clear) to indicate sheen. In color comics these are sometimes filled in with white, or, in more modern comics, replaced entirely with a semi-transparent airbrushed white line.

Emanata: Lines that surround a character's head to indicate surprise or shock. Visually identical to solrads.

Hites: Horizontal lines that trail behind fast-moving characters to indicate motion. Usually come in pairs. A variation is up-hites, which are vertical and appear above a falling object or character.

Indotherm: Squiggly lines placed over an object to indicate radiant heat. May also appear above the head of an extremely irritated character.

Lucaflects: Thinly-outlined shapes placed on shiny surfaces to indicate reflectiveness. Often takes the form of a four-paneled window, most commonly on TV screens.

Plewds: Drops of sweat emanating from the character's head to indicate nervousness, stress, or working hard.

Vites: Similar to dites, vertical lines placed on bodies of ice to indicate reflectiveness. Often placed directly under a character and filled with whatever color the character is.

Waftarons: Squiggly solid shapes that taper to a point on both ends, used to indicate strong odors, either positive or negative (the former typically filled with white, the latter with a sickly green). Warm food items (like a pie cooling on the windowsill) will typically have small wafterons in place of indotherms to indicate both heat and odor.

In a Bloom County Sunday strip for August 5, 1987, Berke Breathed came up with alternate names for some of the above terms, still popular today. In the order they appeared:

Boozles: See Squeans. In the comic, they're "root boozles" since Milo isn't old enough to drink.

Swivles: A curved version of hites used to indicate turning.