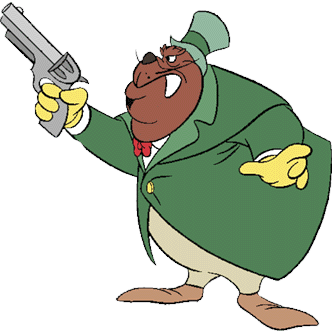 See how they run like pigs from a gun.
"And to ensure complete dominance, the walrus needs a bigger mouth, so it can eat all our childrens. Because walrus don't have sympathy."
— Robbaz, Spore - Creature Stage - Walrus Overlord

Walruses are strange creatures, and ones that most people have little experience with. Perhaps this is the reason why they are a Seldom-Seen Species in comparison to cats, foxes, reptiles, etc. Perhaps it is also the reason that their depiction in the media is so heavily influenced by their appearance. Real Life walruses are commonly seen as fat blobs who lay around on rocks, but many of their features translate readily into an anthropomorphized character with a distinctive personality.

Their wrinkly skin, bald heads, and bushy snouts resembling big mustaches give them the appearance of a Grumpy Old Man. As a result, female and/or young walruses in media are rare. They're also big and blubbery, leading to their portrayal as lazy, gluttonous, and slow-moving. Despite this perceived passivity, their massive tusks and sheer bulk make them appear powerful and potentially dangerous, so they’re also sometimes portrayed as being very physically strong, if a bit poorly motivated.

Villainous walruses are a popular version, combining Bald of Evil, Fangs Are Evil, Good Hair, Evil Hair, and Fat Bastard into one Obviously Evil package. This portrayal finds further fuel in the fact that they're predators who feast on all sorts of animals, from fish, to mollusks (such as clams and squid), to crustaceans (such as crabs), to occasionally other seals. They hunt in the murky depths of the ocean, in waters dark and cold. They also eat large amounts of food, making them seem like Villainous Gluttons. The Trope Codifier for the villainous variety is the poem "The Walrus and the Carpenter" from Through the Looking-Glass, featuring a sneaky, gluttonous walrus luring innocent oysters to their doom. He has been the inspiration for many a Wily Walrus.

Sometimes, fictional walruses are presented as even more predatory than they are in real life. They may eat animals like penguins, or even humans, even though real walruses do not eat any of these.

Wily Walruses can be presented in a variety of ways. Some creators find that the bushy, mustache-like snouts of real walruses make for a good Dastardly Whiplash. Other works portray them as brutal beasts, like a mammalian version of the typical Sea Monster.

Another factor that may have lead to their villainous portrayals - especially the more brutish ones - is the remarkable sounds they make. Would you believe that walruses grunt and growl

? In fact, walruses were even used for some of the dinosaur sounds in Jurassic Park!

In video games, walruses are commonly seen as enemies - or even bosses - in the Slippy-Slidey Ice World. While this is logical, as walruses are mainly found in the Northern seas, they are sometimes paired with animals such as penguins, which is not logical.

Good or neutral walruses still tend to feature at least one of the negative stereotypes associated with the animal's physical appearance, whether it be a grumpy and curmudgeonly personality, a tendency towards gluttony, or extreme laziness.

May or may not overlap with Sluggish Seal. Compare Monstrous Seal, who might be working for this guy, and Angry, Angry Hippos. Contrast Warm-Hearted Walrus. Unrelated to The Walrus Was Paul. Not to be confused with Wicked Weasel. Has nothing to do with a team-up between Doctors Wily and Eggman. (Although this has happened before.)