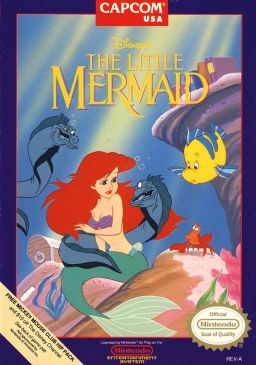 A Licensed Game based on the Disney animated movie The Little Mermaid (1989). It was released in 1991 on the Nintendo Entertainment System and in 1993 on the Game Boy.

In the game, Ariel leaves her prince Eric and becomes a mermaid once again to stop Ursula, who is plotting to take over the entire ocean. What follows is five levels of swimming action looking and playing like an all-underwater Mega Man game, not surprising given that The Little Mermaid and the Mega Man series were both developed by Capcom.

Not to be confused with Ariel: The Little Mermaid, developed by Blue Sky Software and published by Sega for the Sega Genesis and Game Gear in 1992.