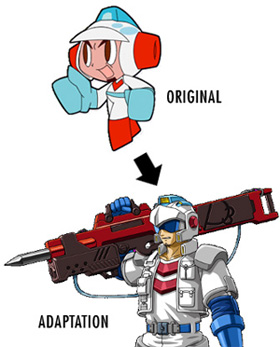 Guess the people behind Namco × Capcom didn't dig the original.
"I'm not really into this fighting stuff unless it's in a courtroom. ...Oh, and with words!"
— Phoenix Wright, playable fighter in Ultimate Marvel vs. Capcom 3 note In fact, his fighting style is pretty much exactly like that.
Advertisement:

There are characters in the media who are known, simply put, for being less-than-dangerous. They might simply be the last competent fighter. They might be a Non-Action Guy or a Damsel in Distress. Worst case scenario, they're The Load. When danger rears its head, the character generally beats feet and lets their tougher friends deal with the problem.

But then, when the work is being adapted or rebooted, the character is made a bona fide badass. The reasons for this are myriad. In some cases (especially video games) this is the result of someone who's a non-combatant in their own series appearing in a setting where fighting skill of some kind is required, overlapping with Power Creep, Power Seep. These types of characters are the kind most likely to use tropes such as I Know Madden Kombat, Martial Arts and Crafts, and Fighting Clown.

Another possibility is that characters who were reasonably competent and skilled in their original incarnations had their capabilities and accomplishments elevated in their next depiction, sometimes to an Invincible Hero or Invincible Villain level. This is related to the Big Budget Beef-Up or Serial Escalation, the character is changed to match the intensity of the action.

In some genres, particularly Anime, the use of Filler story arcs or Non-Serial Movies can help in building up characters in a television or cinematic format that they didn't get in the source material. Both major and minor characters whose abilities were varying degrees of being relatively good, okay, or just plain subpar can receive the chance to shine more in anime-exclusive arcs, added filler scenes for padding, or movies, particularly if they were underused in the source material and didn't get much of a chance to show what they were really made of.

Regardless of the whys, there are two things to consider with such a change:

At its core this causes a significant dissonance with those familiar with the original character. It is not about a change in personality (Martial Pacifist to Blood Knight), method of fighting (defensive Simple Staff to offensive BFS) or battlefield intelligence (Dumb Muscle to Genius Bruiser), but in terms of how relevant they are in a fight. The key is how they are able to navigate through the story. Consider as a result of Power Creep, Power Seep that Superman himself has varied from simply "above human" in strength to near godlike, but he has always been Superman.

As the name suggests, this is based on different interpretations between adaptations. Took a Level in Badass is the same concept except treated as Character Development in the same continuity.

When this is done to a real-life person, then it's Historical Badass Upgrade. For a sister trope specializing in female characters, see Xenafication. The inverse of this trope is Adaptational Wimp. Often overlaps with Adaptational Skill.