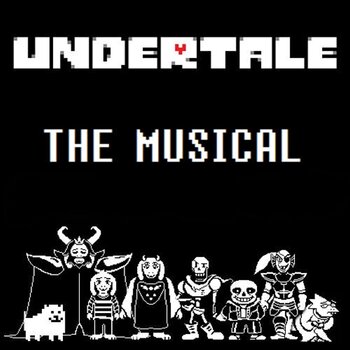 Undertale the Musical is a musical adaptation of Undertale created by Man On The Internet (also known as Alex Beckham). With 41 songs and a diverse cast, it follows the True Pacifist Route of the game.

All of the musical's songs can be found here.

The full musical as one video was livestreamed on YouTube and can be found here.

Man on the Internet has also made videos for a Genocide package (but not a full musical, as it doesn't contain dialogue between songs), which can be found here.

It's followed up by Deltarune the (not) Musicalnote Also known in the thumbnails as Deltarune the (songs similar to a) Musical, a series of songs based off of the soundtrack of Undertale's successor, which can be found here

. Similar to the Genocide package, there is no dialogue between the Deltarune songs, and, like the title says, they're not part of a full musical.

Also, be warned that this will contain unmarked spoilers from the original games.

"If you climb along this trail, you will hear the Undertale..."