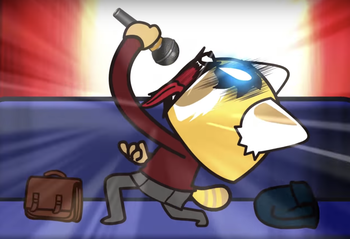 Let's say you've got a line in your song that you really want to emphasize. Really emphasize. Or maybe it needs to be "edgier" and "gritty". What's a musician to do?

This can come in a few different flavors:

This is found most often in Heavy Metal songs, especially with Type 4. Type 3 is almost exclusively associated with Black Metal and Sludge due to its raw and offensive sound, but can also show up in Metalcore or Death Metal, especially Melodic Death Metal and Deathcore. Types 1 and 2 are becoming increasingly common in some alternative rock movements. Types 1, 2, and 3 are often referred to collectively as Harsh Vocals.

Often a part of a Big Rock Ending. Compare Careful with That Axe, where the singer unexpectedly screams with the intention of surprising the audience. The Metal Scream is used for emphasis or to develop a heavier tone for the song; it's only Nightmare Fuel for those not into the genres likely to use it. When combined with melodic or "clean" vocals, it's Soprano and Gravel.

Compare Punctuated! For! Emphasis! for the nonmusical equivalent. Or see here

for the non-human variation. Not to be confused with the scream of metal machinery when something goes wrong.

This trope is often, if not regularly combined with Big Word Shout.