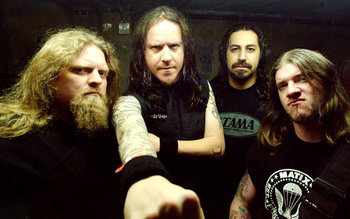 We will never see the end,
We will never be the end.
All of my life I felt discarded,
Never feeling a part of it.
"Linchpin"
Advertisement:

Fear Factory is an American metal band. Formed in 1989, they are well-known for their signature style, which combines death metal, groove metal, thrash metal and industrial metal. They had a large impact on the metal (and "metalium", if you are picky) scene from the mid-90s and onwards, with Machine Head, Chimaira, Devin Townsend, Disturbed and Mnemic all citing them as an influence.

They disbanded in 2002 due to internal disputes, but reformed later that same year without guitarist Dino Cazares, a founding member. They disbanded again in 2006, only to reform again in 2009 with a new lineup, including the returning Dino and drummer Gene Hoglan.

The future of the band remains to be seen, however, due to a lawsuit brought on by former drummer Raymond Herrera and former bassist Christian Olde Wolbers over the rights to the "Fear Factory" name. A planned new album, originally titled Monolith, was shelved for a few years. Burton would suddenly depart from the band in September 2020, however Dino would re-work and finish the planned album with Bell's original vocal tracks intact, which would eventually release in June 2021 as Aggression Continuum.

Not to be confused with Fear Factor, Nightmarish Factory, or the Donkey Kong Country track of the same name.

Tropes headed with quotes from songs by this band: